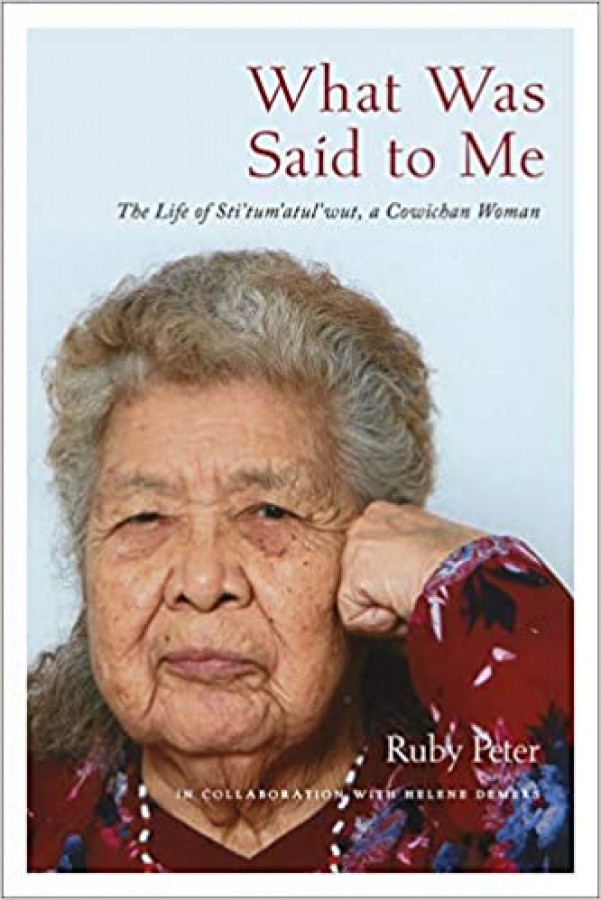 What Was Said to Me

A narrative of resistance and resilience spanning seven decades in the life of a tireless advocate for Indigenous language preservation. Life histories are a form of contemporary social history and convey important messages about identity, cosmology, social behaviour and one’s place in the world. This first-person oral history—the first of its kind ever published by the Royal BC Museum—documents a period of profound social change through the lens of Sti’tum’atul’wut—also known as Mrs. Ruby Peter—a Cowichan elder who made it her life’s work to share and safeguard the ancient language of her people: Hul’q’umi’num’. Over seven decades, Sti’tum’atul’wut mentored hundreds of students and teachers and helped thousands of people to develop a basic knowledge of the Hul’q’umi’num’ language. She contributed to dictionaries and grammars, and helped assemble a valuable corpus of stories, sound and video files—with more than 10,000 pages of texts from Hul’q’umi’num’ speakers—that has been described as “a treasure of linguistic and cultural knowledge.” Without her passion, commitment and expertise, this rich legacy of material would not exist for future generations.

Reacties op: What Was Said to Me