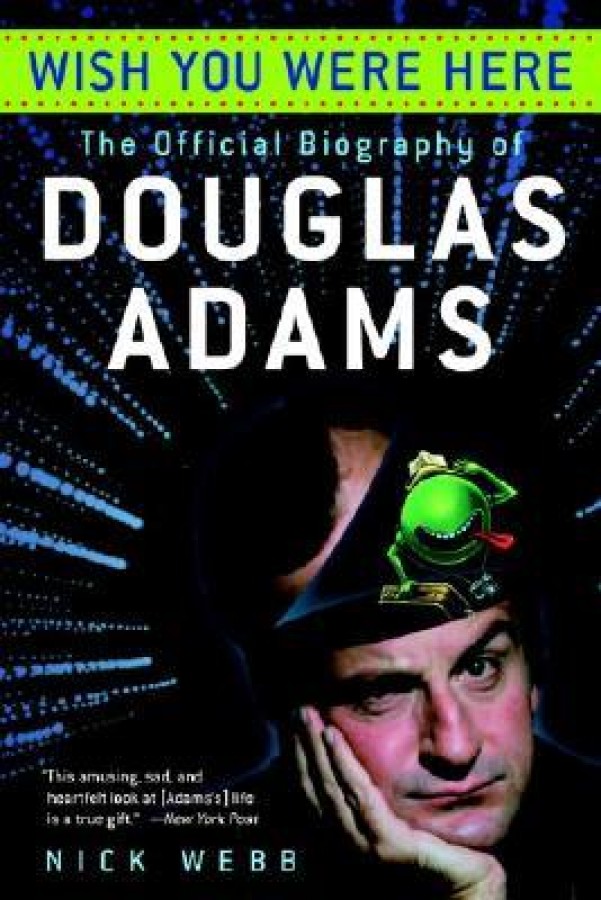 Wish You Were Here

It all started when Douglas Adams demolished planet Earth in order to make way for an intergalactic expressway–and then invited everyone to thumb a ride on a comical cosmic road trip with the likes of Arthur Dent, Ford Prefect, and the other daft denizens of deep space immortalized in The Hitchhiker’s Guide to the Galaxy. Adams made the universe a much funnier place to inhabit and forever changed the way we think about towels, extraterrestrial poetry, and especially the number 42. And then, too soon, he was gone. Just who was this impossibly tall Englishman who wedded science fiction and absurdist humor to create the multimillion-selling five-book “trilogy” that became a cult phenomenon read round the world? Even if you’ve dined in the Restaurant at the End of the Universe, you’ve been exposed to only a portion of the offbeat, endearing, and irresistible Adams mystique. Have you met the only official unofficial member of Monty Python’s Flying Circus? The very first person to purchase a Macintosh computer? The first (and thus far only) author to play a guitar solo onstage with Pink Floyd? Adams was also the writer so notorious for missing deadlines that he had to be held captive in a hotel room under the watchful eye of his editor; the creator of the epic computer game Starship Titanic; and a globetrotting wildlife crusader. A longtime friend of the author, Nick Webb reveals many quirks and contradictions: Adams as the high-tech-gadget junkie and lavish gift giver . . .irrepressible ham and painfully timid soul . . . gregarious conversationalist and brooding depressive . . . brilliant intellect and prickly egotist. Into the brief span of forty-nine years, Douglas Adams exuberantly crammed more lives than the most resilient cat–while still finding time and energy to pursue whatever side projects captivated his ever-inquisitive mind. By turns touching, tongue-in-cheek, and not at all timid about telling the warts-and-all truth, Wish You Were Here is summation as celebration– a look back at a life well worth the vicarious reliving, and studded with anecdote, droll comic incident, and heartfelt insight as its subject’s own unforgettable tales of cosmic wanderlust. For the countless fans of Douglas Adams and his unique and winsome world, here is a wonderful postcard: to be read, reread, and treasured for the memories it bears.