This is a hard book to review as it is made up of 4 shortish stories, each by a different author that describes the journey through time of a cursed timepiece/watch. Each story is told by a female private detective who also features in her own series (apart from the last one). And there’s a cat hidden in the last three. Although every story features a completely different period, characters and setting, the authors managed to bring us an interesting and well-constructed tale. This concept is not an easy task they undertook, but they each did a great job and I can’t pick one that’s more favourite than the other
The timepiece is made of gold that was stolen during an extremely cruel and brutal raid of pirates. Well, the pirates tell a different story about the mechanics of the facts. This gold belonged to the cathedral and was cursed by the bishop to bring all sorts of death, misfortunes, and disasters. But the church had stolen the gold from the Indians and was possibly cursed prior to the raid. The only manner to get rid of the curse is to have it embraced by all four elements in turn. Whether or not this curse is real or not is not clear, you have to make up your own mind to believe or not. Although many of the unfortunate deaths can be explained; there remain various incidents with mysterious bouts of bad luck, misery, and death that are much harder to dismiss

1. WEAPON OF CHOICE (SUSANNA KEARSLEY)
The first story takes place in 1733. The English dispatched an assassin to kill the duke of Ormond, a fierce Jacobite with a substantial following. The captain of his ship is in the possession of ‘La Sirène’, a watch with an infamous reputation for being cursed and bringing disaster, destruction and death. The assassin and a clever newly-wed couple of Jacobite supporters/spies come eye to eye while sheltering in an inn during a fierce storm.
The main characters are to solve the murder of the captain and to prevent the one on the Duke. They’re a lovable couple and I can see them very well carry their own series. It’s an excellent story to open this collection; it has spies, pirates, a murder mystery, and a curse. What more do you want?

2. IN A FEVERED HOUR (ANNA LEE HUBER)
This is set in Edinburgh 1831, almost 100 years after the first story. Here we meet another newly-wed young couple that’s called upon to solve an epidemic of a mysterious and strange disease, the poisoning of a rather sympathetic (I thought him not so bad and I noticed that the female sleuth wasn’t impartial to him) crime boss. Of course, the cursed watch resurfaces after being lost for a century.
There was a real documented outbreak of spotted typhus in Edinburgh that year. So there an enjoyable mix of fact and (plausible?) fiction in this story.

3. A POCKETFUL OF DEATH (CHRISTINE TRENT)
Now we move 40 years into the future, to 1870. ‘La Sirène’ has been split into the casing and the watch itself, and it is the watch self, that’s suspected of being responsible for a series of violent deaths.
I really like the rather original and unusual occupation of the heroine. She’s an undertaker and has to dig up all the buried relatives of a newly knighted viscount and bury them again on a private lot in a London graveyard. And it’s during those activities that she unearths the cursed thing. Violet’s occupation gives an interesting look into the pre-occupation with the death in Victorian times and some of the (now strange looking) habits they practised.

4. SIREN’S CALL (C.S. HARRIS)
We move on to 1944 on the coast of Kent and meet an old home-guard captain that’s murdered in his own house. He was a famous collector of all sort of clocks and his price-possession was the outer case of ‘La Sirène’. All of his life he tried to find the watch self and might have been close to achieving this. There are also 2 detectives from MI5 in the village who’re looking for a German Spy and they think he may be the culprit. There’s even a love story woven into this mystery. It’s also the only tale that’s not connected to a series, although I think the characters are interesting enough to do such a thing.

I thank NetGalley and Poisoned PenPress for their free ARC, this is my honest, unbiased review of it. 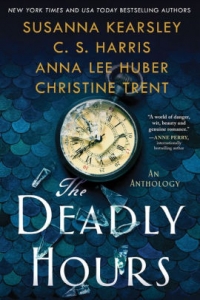