At Love’s Command is the newest novel by Karen Witemeyer, and the first novel in The Horseman series, though it reads as a stand alone with a satisfying “all knots tied” ending. We follow both Josephine and Matt on their journey, and the double POV gives a lot of interest to this story! Before going in depth, I have to say: this cover is amazing! And both my dad and granddad, who are Karen’s biggest fans beside me, are very glad finally a man is featured on the cover. Though being a woman, I do appreciate the cover a lot, too ;)

The story begins with the four Horsemen, specifically their leader, Matt. Originally from the cavalry, they now use their army expertise to help innocent people and uphold justice. I loved how they worked together, their team work is admirable even though everyone has his own specific quality. I came to love all four characters, and I really hope each one gets his own book..! There’s Preach, who is a little gruff but has a Bible verse for every occasion stored in his head. Mark, with a huge charisma and sparkling eyes and yet is very ethical and hard working. Jonah, an amazing sharp shooter and reliable fellow, who’s always got to be on the defensive because of his dark skin color (I really hope we get his full story!). And Matt, who carries so much guilt from his cavalry past, and doesn’t think he deserves love... he cares about everyone all the time and forgets to care about himself.

As injury always follows these men on their quest for justice, they find themselves in need of a doctor. And there we have doctor Jo, who turns out to be woman...! I looooove her character so much! She’s very beta, and often thinks with logic and approaches each difficulty objectively and all the time she holds these little experiments in her head. I can relate, lol! However as you can imagine, these times are not kind on a female doctor, and she’s had to fight for her position, having to prove over and over she’s just as worthy as a man. This not only made her stubborn, it made her kind of other people’s struggles.

“She stole a peek at the stiff fellow who had yet to reanimate after suffering rapid-onset paralysis. A condition brought on by the pronouncement of her medical expertise. Josephine shook her head. The poor male brain. So susceptible to gender-oriented shock.”

And then we have a lovely clash between Matt and dr. Jo! Oooh the romance is as swoonworthy as they come. I rooted for them from page 1. There’s a depth in their relationship that makes their bond very believable and after a while they are both not afraid to communicate and tell the other what they really feel. I love good strong talks with no misunderstandings!

I also very much loved the plot! Normally Karen’s book are more focused on the romance in a small town setting, with high stakes building up in the end, but here the action goes on from about halfway to the end. Of course that is to be expected with a band of ex-army man, and I absolutely loved how it played out! The shifting of POVs and the build up to each confrontation was very well paced, and it kept me glued to the pages. I got this ARC at 8 in the evening and I read it non stop till 4 in the night lol! I just couldn’t make myself stop... something about Karen’s writing style is so addictive, you just have to read on. As a huge Karen Witemeyer fan, and having read all her other books and owning them in two languages, this book absolutely met my ridiculous high standards, and I already am sad I have to wait so long for her next book and realized requesting this ARC made the wait for a next book longer. But I cannot regret my life’s choices and would request again in a heart beat.

I received an e-arc from Bethany House through Netgalley. I squeeled so hard my dog looked annoyed. My huge Karen Witemeyer addiction might have influenced my review, however the publisher and the free copy have not. 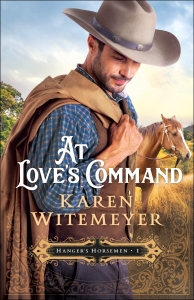