Sisters of Sword and Song by Rebecca Ross is a YA fantasy standalone. And that’s one of the many things I love about it: no waiting for sequels! I really wish there were more fantasy standalones, and Rebecca Ross clearly proves that it can be done to have a whole new world captured in one book. This world is very intricate and well thought out, yet simple enough to understand without info dump. I think it’s based slightly on Roman/Greek mythology, with a pantheon of gods, and descendants of those gods can have magical power and they left relics on earth that have magic properties.

Evadne and Haldyon, the two sisters who are the main characters of this book, are from a fallen god who chose to be human out of love, so no special powers there! Evadne always thought she would have magic though, and is really fascinated by it. Haldyon has always been a very good fighter and can outrun anyone, and she joins the Queen’s army at a very young age. Years later, she is on the run from her commander and is charged with murder. Evadne offers to take half the sentence, and she ends up serving the commander while Haldyon is thrown in prison. But all is not as it seems, and plot twists and unexpected revelations will follow and throw both sisters into a bigger game...

This book is so original! It wasn’t at all what I expected it to be, it was better! I loved the story of both sisters and their bond (even though they haven’t seen each other in years). And their big supportive family, and amazing loving parents. It reminded me a lot of my own family so that was really cool! And something you don’t quite often see in a fantasy... and yes, both Evadne and Haldyon had their own paths to go so they’re not in the book all the time but the scenes with the family were my favorite, you could feel the love and somehow I felt that love followed them on their quest and is part of their identity, especially with Evadne. I really enjoy her story line as it also features a young mage with a big heart. She also has a disability, her foot was hurt in a dog attack, but she doesn’t let herself be defined by this nor let it decrease her worth as a human being.

I also really love the quest they went on, the villains were very well thought out and the world is very rich in imagery. I was really invested in the story and couldn’t wait to see how it went but I can’t say much about it because of spoilers. Above all, it was a story about love in all its forms, about bravery and sacrifice and standing up against evil, about flawed human beings and forgiveness.

I received an e-arc in exchange for my honest opinion. 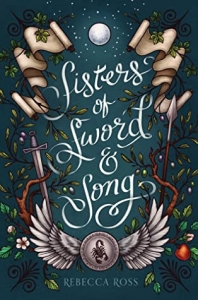