Tell us a bit about yourself.

I have been writing since I could first put sentences down on paper, but I am fortunate to have several other passions in my life. I am a Classicist by training, a teacher, and a theater director who specializes in Shakespeare’s plays. I credit my work on Shakespeare with so much of what I know about story-telling, and my experience as a director helps me to visualize my scenes more vividly. Teaching has also influenced my writing. I find it incredibly powerful to work with students, and to be allowed to support their growth as scholars. I am a believer in the saying that you never truly know material until you have taught it. Teaching helped to give me confidence in my own knowledge, while also showing me that there is always more to learn.

Even though I was a Classicist, for a long time it didn’t occur to me to write fiction about Classics. I wrote academic essays about Achilles on one hand, and contemporary short stories on the other. The turning point came when I directed a production of Troilus and Cressida, Shakespeare’s dark, funny and angry play about the Trojan War. Suddenly I understood that it was possible to interact with these stories not just through scholarship, but through fiction.  That summer I began The Song of Achilles.

Where did the inspiration for Circe come from?

The Iliad and the Odyssey are two of the founding texts of my psyche.  My mother used to read them to me as a child, and as soon as I learned ancient Greek, they were the first works I attempted to read. I have always been fascinated by Circe. Unlike most women in ancient myth, she is allowed to be powerful without being punished for it. She is complex—she doesn’t fall into one of the two usual ancient categories: villainess or virtuous (and usually tragic) love interest. When Odysseus first meets her she turns his men to pigs, but she ends up helping him quite a bit as well. She is also the first witch in Western Literature. I wanted to explore her outside the bounds of Homer: how she ended up with her powers, and what happened after Odysseus left. I wanted to give her story the full, epic scope that men’s stories are given as a matter of course. I see the novel as a coming of age—with monsters and magic.

What kind of research did you have to carry out?

As a Classicist, I was fortunate that much of the research was already at my fingertips.  I reread the Odyssey so it was fresh in my mind, but as with The Song of Achilles, I found that there was a point in the writing where I needed to put Homer aside and find my own way through the story.

I also revisited all the other myths I could find that touched on Circe. This included works by Ovid, Apollonius of Rhodes, Virgil, and more. Likewise, I read all the secondary sources I could find—I find literary criticism very inspiring when I’m stuck!  Finally, I did research about plants and ancient magic, which was quite fun. Ancient witchcraft was a fascinating, often contradictory discipline.  Some of what I found I ended up using; some I didn’t.  Since Circe is the original, founding witch in western literature, I didn’t feel I necessarily had to be bound by what came later!

What can the Greek myths still teach us about modern society?

That human nature is still the same as it ever was. We struggle with the same impulses.  We are angry, we love, we grieve, we offer unexpected mercy and understanding. These stories show us that there is nothing new under the sun. We can learn from that, and if we can make peace with our age-old, messy humanity, perhaps we can start to harness it for the better.

"This is as close as you will ever come to entering the world of mythology as a participant. - Margaret George

What did you enjoy reading growing up?

I was one of those children that read constantly and democratically. I would pick up anything—my parents’ books lying around the house, a newspaper, the back of a cereal box.  As long as there was text, I wanted to read it. I quickly realized that my favorite books were all adventure stories. The first book I ever really wept at was Mrs. Frisby and the Rats of NIMH; a few years later, it was The Hunchback of Notre Dame. I don’t think I understood even a quarter of Victor Hugo’s brilliance, but the injustice and tragedy still came through clearly, and lit a fire under me. Watership Down was another favorite; I think of it as the Aeneid with rabbits. I read any myth I could get my hands on. Reading the Aeneid in Latin in high school was an intellectual revelation, as was Margaret Atwood’s The Handmaid’s Tale, and James Baldwin’s work in general.

What was it like to win the Orange prize?

Life-changing. I did not expect to win. I was a debut novelist, in awe of the other authors on the list. The lovely and miraculous Ann Patchett (who had already won the Orange prize for Bel Canto), lent me a fabulous orange dress to wear. So there I was, at this glamorous literary gala, wearing Ann Patchett’s gorgeous dress, surrounded by the wonderful people of Bloomsbury UK… Basically, I felt I had already ascended to literary Nirvana. Most of what I remember after hearing my name announced was Joanna Trollope asking in a whisper if I was going to be okay (I was visibly shaking), and feeling an overwhelming wash of gratitude. I had spent a decade living with this story, holding these characters close to my heart. Knowing that they had moved others as well was a tremendous honor.

The powerful story of the mythological witch Circe, inspired by Homer’s Odyssey. Circe is the story of an outcast who overcomes scorn and banishment to transform herself into a formidable witch. This is a magical epic of family rivalry, power struggles, love and loss – and a celebration of female strength in a man’s world.

In the house of Helios, god of the sun and mightiest of the Titans, a daughter is born. But Circe is a strange child--not powerful, like her father, nor viciously alluring like her mother. Turning to the world of mortals for companionship, she discovers that she does possess power--the power of witchcraft, which can transform rivals into monsters and menace the gods themselves.


Reacties op: Madeline Miller tells us more about her and her stunning new book: Circe! 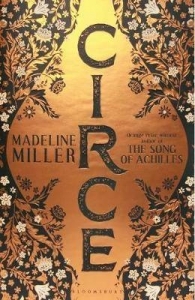