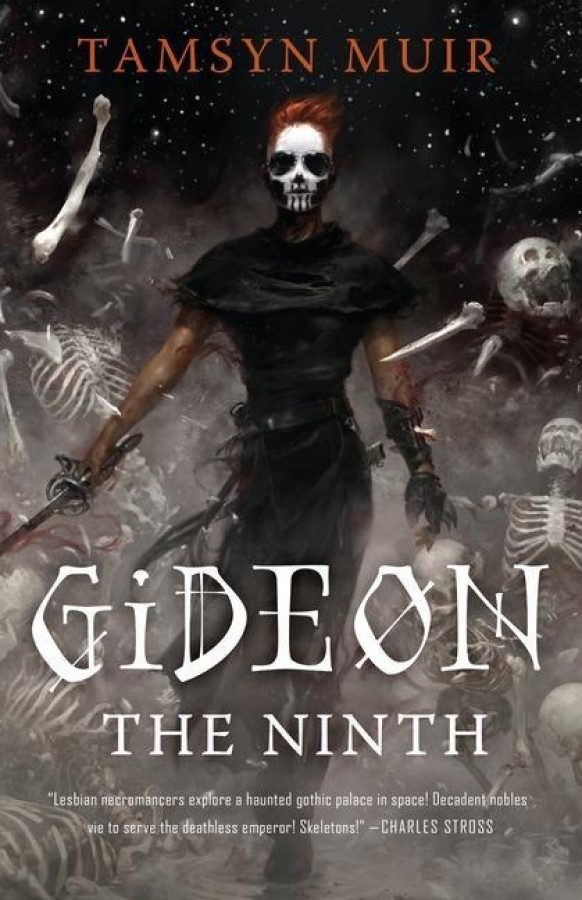 The Emperor needs necromancers. The Ninth Necromancer needs a swordswoman. Gideon has a sword, some dirty magazines, and no more time for undead bullshit. Tamsyn Muir’s Gideon the Ninth unveils a solar system of swordplay, cut-throat politics, and lesbian necromancers. Her characters leap off the page, as skillfully animated as necromantic skeletons. The result is a heart-pounding epic science fantasy. Brought up by unfriendly, ossifying nuns, ancient retainers, and countless skeletons, Gideon is ready to abandon a life of servitude and an afterlife as a reanimated corpse. She packs up her sword, her shoes, and her dirty magazines, and prepares to launch her daring escape. But her childhood nemesis won’t set her free without a service. Harrowhark Nonagesimus, Reverend Daughter of the Ninth House and bone witch extraordinaire, has been summoned into action. The Emperor has invited the heirs to each of his loyal Houses to a deadly trial of wits and skill. If Harrowhark succeeds she will be become an immortal, all-powerful servant of the Resurrection, but no necromancer can ascend without their cavalier. Without Gideon’s sword, Harrow will fail, and the Ninth House will die. Of course, some things are better left dead.

“Festooned with skeletons, aglitter with technonecromantic delights, both middle fingers raised to the galaxy, Gideon the Ninth is a gothy Tank Girl-Meets-Utena-Meets-Gormenghast dueling wildcard mashup that has me positively giddy for the future of the genre.” ―Max Gladstone, author of The Empress of Forever "

Muir effortlessly compiles macabre humor, body horror, secrets, and tenderness into the stitched-together corpse of a dark universe, then brings it to life with a delightfully chaotic, crackling cast of characters and the connective tissue of their relationships." ―Publishers Weekly starred review