This book was shockingly good. I am literally speechless.
I loved the first four stories, they got better with each part. I loved how the relationship between Sam and Celaena developed. At first, because I already read the first three books in the TOG series and I knew what happened to Sam, I thought I wouldn’t be attached to this character and that I wouldn’t care that much. I was wrong. I was very, very, very wrong. In those small chapters with him, I have grown to adore the boy, I cried with the ending. he didn’t deserve this. It makes you understand Celaena very well.

The developement of Celaena is incredible. Subtle hints about her past. You can see that she is still not as good as in the other books. She isn’t the perfect assassin yet and she makes mistakes. That is so much better than the perfect girl. I liked that she made friends, sad that she is betrayed so many times. I liked a lot of characters.

Especially Arobynn. I am supposed to hate him, I know, but I can’t. I hate and love him at the same time. I think that is also the effect he has on Celaena. She wants to leave him, but at the same time, she doesn’t. He is mighty with his charm and tricky deeds. That charming man, I cannot get enough of his character. I would even want to know more about his life. Give me a companionbook about him, Sara J. Maas.

Another character is Sam. In the beginning, I wasn’t sure if I was going to like him. He is definitely growing on you in the same way that Celaena is starting to like him. She doesn’t like him that much in the beginning, but unconciously she does. She misses him and then realises she loves him. That is one of my favourite kind of romance. The slow burn. It made the ending extra tragic and traumatic. I cried! Now Sam is literally one of my favourite characters. He has a sweet side to the assassin in him and I love that. I wish he would have been endgame, but sadly, it couldn’t happen.

The storyline was so interesting. It is chronologically, that helps to follow the story. The first parts were short, but enjoying. They were different than the last three. These were less emotional, but gave you an insight in the work of Celaena, her heart and her relation with Arobynn and Sam. The last three were so much better. The silent assassins hava a place in my heart now. They were surprisingly well written. But then, Sam was back in the game. It was so pleasant to see Celaena her normal life. So interesting. When you’ve read the first three books in Throne of Glass, you recognise the story and all the references.

I think you can read this book as the first book in the series or before you start the fourth book. Otherwise you can be a bit (or a lot) confused.

I am speechless about this book. The first stories in it were decent, but it got better and the last one was phenomenal. 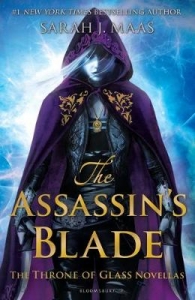