This is the second book in this series and has previously been published as ‘Stabbed in Wales ‘. I read the first one as well and I think it’s a great idea to relaunch this series and hope that the next books will follow as well.
After the dramatic events in Swansea, Gaby has been reposted at Llandudno in North Wales. She seems to fit in and even gets promoted. Her first case as DS looks like an open and shut case, but the suspect is adamant that she didn’t kill the victim. Not everything fits in this case.
When Christine takes a stranger back home after her birthday bash, she expects to wake up to a hangover. But instead of the stranger, she finds the naked dead body of her housemate, covered in blood in her bed. She doesn’t have a clue what has happened and the police arrest her as the sole suspect.

The first part of the book consists mainly of the experiences of Christine. The author cleverly manipulates the reader with a few words that make or break our sympathy for a suspect. You know that Christine is innocent, or not? That all depends on whether she’s a reliable narrator or not. You simply don’t know in this kind of books if she tells the truth. The premise is brilliant but the story takes a major turn when another redhead goes missing and both cases seem to be related. From that moment on, Christine’s story becomes less important but at least there’s hope for her love life.
In this volume, we get a clearer picture of some of the supporting characters that it makes me think that Gaby will settle down in this new location. Not everybody was happy with her arrival in the team but she gets on with most of her new colleagues. Only the pathologist seems to have it in for her. The family liaisons officer she befriended in the last story has followed her to this new area. If anything, she’s getting promoted a bit too quickly to remain real.
Vivid pictures with even smell included, point out the horror of discovering a murder victim. The author gives very detailed descriptions of a crime scene, so if you’re squeamish sometimes you better skip a page.
Owen is a favourite of mine. He’s got a photographic memory, something that’s very handy for a police officer. But he’s also a loving husband and father, with excellent work ethics. Sometimes he gets that much drawn into a case, that Gaby has to remind him to go home to his pregnant wife.

Reacties op: A strong second in the series 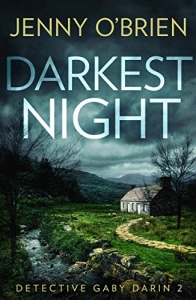