We’re 1957 in rural Ireland. In the mansion of protestant colonel Osborne, the body of a catholic priest is found in the library. The house friend has been stabbed and gelded. From the start, there’s pressure from the archbishop’s palace to treat the whole thing very discreetly and classify it as an accident (he fell from the stairs) and the details that must not come out, imagine the scandal and the neighbours.
It’s DI Strafford; a member of the same aristocratic minority who is dispatched from Dublin to handle the inquiry. He has the feeling as if he’s landed in a theatre play with everyone in the house an actor, dressed up to say their lines. Will he give in to the pressure from the omnipresent Catholic Church or will his quest for the truth kick against some holy shins?
With a snow storm brewing up, everybody is cooped up inside apart from Strafford’s (with an R) assistant who’s gone missing.

It starts out as a classic murder mystery. How much closer can you come than a body in the library of a remote country house amidst a snow storm? It has a very slow pace as befits the period but it doesn’t take itself too serious with several references to Agatha Christie and Poirot.
Strafford is an enigmatic figure. He’s a man who feels uncomfortable with his place and role in this life. He became a policeman to rebel against his father but asks himself now if he would have been happier if he’d become a barrister as his dad wanted. He also recently split up with his girlfriend and stands very uncomfortable in life. He thinks things through and through but doesn’t relate well to people. They make him feel awkward. He’s an outcast for the gentry but also a weird element in the police force. I couldn’t feel very much sympathy for this aristocrat despite him having a very strong moral compass. I think he’s a rather sad man. Because of his thinking he’s always on the outside looking in but not being part of what’s going on. Well, that’s how I see him, someone else might think differently.
To 21st century readers, a dead castrated priest means usually just 1 thing, and points to a very distinct motive. But here we are in 50’s Ireland where the church influences and holds power over almost every aspect of everyday life. A murdered priest just does not happen, let alone one mutilated in this manner! As an historical and social document, it paints a bleak picture of post-civil war Ireland, where the Catholic Church had its claws on politics, press, police and anything else you can think of. And how they condoned abuse and swept it under the carpet. That is when the people dared to make a complaint as most didn’t dare to speak out against a priest. Such things were common knowledge but no one would speak publicly about it. The best outcome would be that the offender was placed in another parish, where he’d go his merry way again.
I’ve always wondered how the correlation between pedophiles and priests (of any denomination) works. Do they become priests in order to get in contact with children because they’re pedos or is it the other way round and do they discover this perversion only when they’re already priests? No matter what the answer is, YOU DON’T TOUCH CHILDREN!!! And for those who say that they can’t help those feelings. Well, that’s the lamest excuse of every rapist and killer. You don’t have to act on those feelings. Seek help. So many people have feelings that they don’t act on. They know very well that what they do is out of order or they wouldn’t try covering up their crimes. I don’t want to call for vigilante justice, but the courts should be able to order compulsory castration after serving prison time.
I want to say that there are no graphic descriptions of these crimes. It’s told very tastefully with the act self, told off screen. This is in stark contrast with the minute descriptions of people, surroundings, and landscape that can be found in the rest of the book. You could almost draw (well, those with a talent for sketching can) the people when Banville describes someone’s peculiar face or the clothing they wear or put on. It’s really beautifully worded. So it certainly fits into the literary fiction box as well as being a police procedural and a murder mystery. It’s a fairly simple straightforward story with subtle layers of historical social comments that’s written in a very beautiful language.
I thank Netgalley and Faber & Faber for the free ARC of this book the provided; this is my honest and unbiased review of it.

Reacties op: A Body In The Library 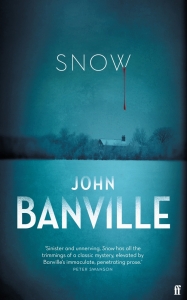