Father Marco Venetti is no ordinary priest nor is he a Father Brown type. He used to be an officer in the Italian Navy. When his former lover, Elena comes to him in confession she tells him that she’s forced to pick up some very dodgy and violent Arabs while her daughter and sister are held hostage. He acts as a full-blown action hero to liberate both women while killing most of the men. They discover the plot for a massive terrorist attack on Vatican City within the next two hours. The Saudi prince behind the plot now plans to acquire 2 nuclear weapons. But even he has someone pulling his strings.

This story is set in the highest circles of the Catholic Church and international diplomacy where unsavoury deals and assassination plots are made in backrooms. For the sake of the story, let us suppose that the end justifies the means and that the many killings are justified. But something that’s clearly visible in the narrative, is the enormous power that little Vatican City/the Catholic Church wields in the international community and how its influence can be used to obtain other objectives. It also mixes real issues and organisations with fiction that gives it just that bit of extra taste; Boko Haram, CIA, Chinese nukes, Russian spies, Saudi princes, …
But also it gives an interesting discourse on why, even a very progressive pope cannot enforce certain reforms that are long due; female priests, abortion, homosexuality, birth control, … Unfortunately, those changes won’t be for the foreseeable future and that’s a loss for the church but not greater than another schism would be.
There are 2 distinctive parts in this book. First, we have the story of the imminent attack on the pope and how father Marco gets involved in these matters. The second part covers the attack on the Saudi prince. There’s also an opening and the start for a second book because not all is resolved at the end. There are many aspects to this book; a spy thriller, romance, religion and politics, action and adventure. All those elements are whisked together to form a fluent, suspenseful narrative that offers some unexpected twists.
There’s just one thing that I didn’t understand; how did Elena from a traditional Muslim family become such a devout and loyal Catholic? I don’t say it doesn’t happen but in real life, such people are completely disowned and shunned by their own family. That’s a best-case scenario as honour killings are no figment of the imagination.
There are some very beautiful descriptions of Rome and Italy but also of the Austrian countryside around Salzburg. I haven’t hiked the exact trails described in the book but some very similar and the ache in Sarah’s calves is most realistic. The atmosphere is very well captured, I think.
I could notice that the write was an American by some of the words he chose, but nothing that I didn’t get. He’s got great penmanship and wrote an entertaining suspenseful story with enough plot twists to keep me interested between the many fights. A sequel that tells us who’s really behind the devious schemes is eagerly awaited.
I thank Netgalley and Bookouture for the free ARC they provided and this is my honest and unbiased review of it. 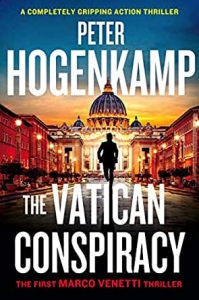