I had read the second book in this series and liked it enough to jump at the opportunity to review the first book as well. This is where it all starts, Charles Lennox’s first-ever case.
Charles Lenox, a young man of noble birth graduated 7 months earlier from Oxford doesn’t find much joy in the usual pleasures of his class and has it gotten into his head to become something that doesn’t exist in England up to now. He will be the first private detective but Scotland Yard laughs at his endeavour and to his class, he’s an embarrassment as gentlemen aren’t supposed to work with their hands.
In one of his newspapers Charles finds a mysterious letter by someone claiming that a month earlier, he committed a murder that was hardly noticed by press or police. As to celebrate this ‘anniversary’ he will commit another crime against a woman within a week. This article intrigues him and he starts searching for the crime that’s been committed. In Walnut Grove (a small islet in the Thames near Twickenham) they found the naked body of an unknown strangled young woman hidden in a sailor’s trunk, just a month earlier. There were no leads as to the identity of the victim or killer and the press lost her interest as a higher profile murder took place around the same time. If the letter is real, there’s hardly a day left before the murderer will strike again. And he does. There are police detectives on the case already but Lenox is determined to be part of the investigation. Sir Richard Mayne, head of Scotland Yard, does hire him and pays him half a pound a week. Payment is a dishonour for a gentleman and in the next book he’s very adamant that he doesn’t charge for his services. Another letter arrives in which the killer promises another murder in a month’s time before he will disappear. Little by little Lenox finds clues that reveal several things about the killer’s identity. How it eventually resolves is simply brilliant. I hadn’t guessed this outcome in a million years!
Lenox has also a mysterious private case from a man that keeps finding envelopes with a five-pound note, each time he travels from his house in Dulwich to London or back
There are also a few interesting stories about the background stories of his valet/assistant Graham and the housekeeper Mrs Huggins, who’s susceptible to cats. It turns out that she's not the only one. We get a lovable look-in at Lenox’s home- and family life as well. His father has a cancer death-sentence and we live with Charles through this difficult period when he connects with his father more than ever before.

As always I’m a fan of the tidbits of period facts. And there are plenty in this story. The safety matches (as opposed to Lucifer matches that sometimes caught fire spontaneously) came into use. I didn’t know that 1850 was the year that the first ever hippopotamus was brought to England from Egypt and thousands of people came to see him at the London Zoo. You also learn how ‘Scotland Yard’ came by its name. What’s not in the story but also interesting is that it’s the year that ‘David Copperfield’ came out as a complete book.
I must praise the detailed and vivid descriptions of the sights and of London street scenes and of activities on the Thames. The river often takes centre stage in this story. You can certainly picture and almost smell or hear them.

1
The Woman in the Water - Charles Finch 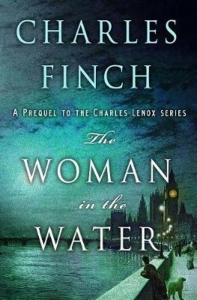