When I think about Storm of the East I honestly can’t form thoughts. I thought it would be better after a few weeks but I’m afraid it didn’t really. Athan, Aurelia and all the other characters have taken up residence in my head have turned said head into a giant ball of feels. Nevertheless I shall try to convey how much this series means to me. Tbh I’m kinda proud I used nevertheless, it seems my senses are slowly returning after all.

First I cannot believe this series is not as hyped as it should be! Seriously, this is sooo good, and the only flaws I can think of is maybe Athan is too adorable? Aurelia too fierce? Arrin too flawed (seriously what is the deal with Arrin? I need to know because I feel a Snape like revelation coming up!)? And Reni is a douche, seriously.

Ok I get it, I am still a mess as I keep saying names that probably won’t mean anything to anyone casually reading reviews to find out if this book for them. I don’t know you, but trust me: this book will blow you away.

THAT WRITING. I need to say this again, because just like book 1 you get this wonderful prose and awe inspiring sentences, without distracting from the story. The story itself is amazing... we get to see a lot more of Resya, where Aurelia suddenly finds herself in the middle of a war, and she sees how she can’t stay silent and let injustice happen. With her big, brave heart, she searches for ways to make an impact, to make her voice heard. In the previous book we saw this war in Thurn (which lies next to Resya), and while it made an impact on people in the north and caused mild outrage, because it was far away everyone (including you, the reader) can detach yourself easily, but now you’re right in the middle of the conflict and find that what you did was not enough. That’s the struggle Aurelia faces, along with some revelations. Because oh my there were plot twists! Every time you think you know how it works, another side has come to light which makes you rethink everything. It really shows the complexity of war, but ultimately the complexity of human beings. Aurelia’s making the hard choices, sacrificing her future and making an allegiance with the Ambassador Havis (who has some tricks up his sleeves too).

Athan also hasn’t got it easy. His squadron is right in the middle of the war, and he’s starting to doubt everything after the revelations of the previous book. He finds comfort in his squadron, especially his loyal friend Cyar who is a cinnamon bun and yet isn’t afraid to call out BS. They get a third member in their little group, Trigg, an untrained pilot whom Athan needs to train, which he doesn’t like. But Trigg is more than he seems and I’m here for it. Also not, because I care about so many people now and there is a WAR and not everyone is going to make it, you can just feel it (and the fact that fighter pilots usually don’t have much of a chance at long term survival). The feeling of the war itself is also very well done. I could spot some ideas from the Blitzkrieg to D-Day, and the planes themselves remind me a lot of the Battle for Britain in 1940 (Athan is soooo flying a spitfire in my head!). But it was so intricately interwoven, that this is very different from actual history, and this makes the stakes even higher as you have no idea what is gonna happen! I love seeing this! And yes, Athan’s dysfunctional family is being very difficult again, and you can see more clearly that Athan at a time needs to make a choice about where his loyalties are. His romance with Aurelia, though mainly through letters, is very sweet, and when they meet again (come on, you just know they have to in this book lol), I was crying of happiness. Even though Athan did set himself up for epic failure. The end of this book was heartbreaking and a set up for even bigger things to happen in the next, i’m not sure how much bigger you can go, I’m exhausted with feels already, but I’m here for it and I can’t wait to find out! I’m seriously invested in this series, it’s so amazing and everything is so complex and the worldbuilding is sublime, and there are so many awesome characters I didn’t get to name (Aurelia’s mom! The General! Tirza! Reni! The Resyan royal family! The other pilots! Karl and Folco! Garrick! Katalin (I need mooooore), and Leannya wil have a few suprises of herself I’m sure). And the themes of colonialism, racism and refugees are very important, especially now (and how war has no winners).

Be warned, this will give you a serious book hangover and will cause you to make fan theories for days. And spotify playlists.

Reacties op: All the feels

1
Storm from the East - Joanna Hathaway 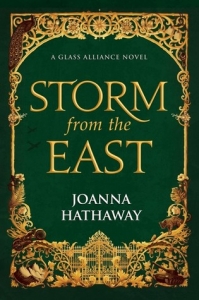