Where Dreams Descend is a brand new debut by Janella Angeles. We follow Kallia, a magician showgirl who grew up an orphan in a nightclub, and is kinda trapped by Jack, the master. When she sees a flyer for a competition in a town she’s been longing to visit, she takes her chances and runs off to compete. However, women don’t get to compete, and she has to pull all the tricks out of her sleeves to be taken seriously as a competitor.

I love Kallia, she’s a very strong and very feminist character. She’s very sure of herself and a bit arrogant to be honest and doesn’t take any crap from anyone. I don’t think you need to be like this to be a strong character, but with Kallia, it works. She reminded me a bit of Celaena actually. However, if I look at the competition, the other contestants all really boring and nameless, so it’s kinda easy to win lol so girl be cocky about it! I think the women circus camping in town has more strong magicians than the entire competition. The women all were great, too, they all worked together and lifted each other up (and no, not just in the acrobatic way lol). They became real friends to Kallia and accepted her. There is a lot of women power thrown in, and I love that aspect!

Kallia also makes a friend, Aaros, and makes him his assistant about 5 minutes after he tried to pickpocket her, which is the best way to start a friendship. The roles are reversed, as he is the eye candy now and does so splendidly. He’s an amazing friend and always there for Kallia, but tbh I didn’t like the way she treated him. Convenient if he is there, dismissed when he’s not needed. They didn’t really have a mutual conversation where we found out more about his background or likes and dislikes. He’s just there to cater to every whim, and while he does it admirably, I think this is just not right in a friendship. But Kallia did grow a lot and learned that she can actually trust others and ask for help, so that’s a big plus!

Daron is one of the judges, who has come to town for a whole other reason, but he gets swept away in the competition anyway, especially when he sees a certain pretty girl lol! Unfortunately, they dislike each other on side, but maybe there might be a slow burn enemies to lovers plot. And if there were, it was done very well.

The antagonist was really creepy, and very mysterious, and I honestly lived for the scenes with him, because he’s very interesting.

The story takes a long time to set up, which I personally don’t mind at all. The worldbuilding was big, with many aspects and ideas, and the magic system was pretty cool too! Some things remain unclear (like there is this kind of magic police that is threatened to be called in, but why they should come and what they actually do I have no idea). However, there were aspects I liked less... for me, the writing didn’t work. It was very unclear to me in the beginning when flashbacks began and ended, and throughout the book I was wondering where exactly I was sometimes. I couldn’t really feel the surroundings and I was confused sometimes and found myself flipping back to see where I was exactly, which didn’t always have an answer. I don’t really know what most of the characters look like... The competition was a really nice element, but to me it fell a bit flat, it wasn’t spectacular and there wasn’t much emphasis on them. We basically only see Kallia’s performance, and that’s it. The other competitors remain mostly nameless, and we don’t see them much at all.

The story has much mysteries, and set up for a very rich world with its own questions, and after 400+ pages I expected to see at least some of them answered. But unfortunately, there is no resolve, and no questions answered at the end, only more questions. This frustrated me a lot, the ending fell flat for me, as I want at least some answers instead of a few hints and a cliffhanger.

So, all in all, I’m not entirely enthousiastic about this book. I did enjoy it a lot (except for the ending lol), because I loved the worldbuilding, the slow building romance and the characters. And the magic system is unique in its use and intruiging. But I think there are some flaws that unfortunately brings the rating down a bit.

I received a free e-arc from the publisher through Netgalley in exchange for my honest opinion. 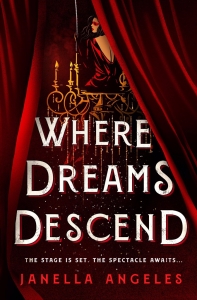