All these strong women writers from the 18th, 19th and 20th centuries
Didn't back down for obstacles and saw life as a barrel full of possibilities

They followed their heart and dreams, and clearly had a mind of their own
You'll often be amazed by the pieces of their life that in this book are shown

It all started with the podcast Austen vs. Brontë: Bonnets at Dawn.
Initially only 12 episodes were planned in which the lives and works of Jane Austen and Charlotte Brontë would be compared to each other. But along the way it became clear that both women showed lots of similarities and that - even though their writing was different - their struggles and independent visions were very much alike.
Furthermore, by talking about these two women in the podcast, it became clear that other female authors always came back in the conversations: authors who influenced Austen and Brontë and/or authors who were influenced by them.
'Austen vs. Brontë' was dropped from the name and the podcast became a space where the lives and work of women writers from the 18th, 19th and 20th centuries were discussed.
If you're interested to discover this podcast (which already counts 136 episodes now), you can head over to Bonnets at Dawn.


Nothing is impossible to a determined woman

The hosts of the podcast, Lauren Burke and Hannah K. Chapman, worked together with illustrator Kaley Bales to create a book about 18 of these inspiring women authors.

Six chapters shine a light on a different aspect that each time connects three women:
- The horror of the everyday
- Finding their voice
- Activism as art
- Private lives
- Public identities
- Protection and profit

Thus 18 fascinating portraits are presented, both from women who are very well-known (like the three sisters Brontë, Louisa May Alcott, …) as women who may be lesser known but therefore certainly not less interesting (like Frances E.W. Harper, Anne Lister, Edith Maude Eaton, …). Of course, this also depends on your own foreknowledge.

Each chapter follows the same structure:
An introduction of two pages lets you discover what the three women have in common with each other and thus how they relate to the main theme of the chapter.
Then every woman writer is put in the spotlight. After an interesting one page-biography follows a graphic novel that often delves deeper into a certain aspect of their life. Finally some fun facts are presented as well as a bibliography which is classified according to the type of works (travelogues, short stories, novels, nonfiction, plays, poetry).

The visual appeal is the greatest asset of this book.
Not often do you encounter books with a combination of interesting text, graphic novel and fun facts.
Although the graphic novel-parts may be a bit confusing as they go back and forth in time or the characters sometimes look alike, they add a nice touch to the whole.
As 'old' literature is presented in such an attractive way, it's easy to imagine that this book could be successfully used in high schools to encourage younger generations to read 'classics'.

Does this mean that this book is suited for everyone? No.
If you already know much about these women, the content will probably be too concise.
But if you don't know them already (or at least not so well), this book is a very nice first acquaintance that incites you to further explore their interesting lives and many works.

Reading about these pioneers in different fields (equal rights for women, coloured people, …) and about their modern views (about gender, business, society, …), can have severe side effects.
Not only will you want to learn more about these women themselves, but your 'want to read'-list will grow as well because lots of their books will make you curious.
Bearing in mind that these women authors lived in the 18th, 19th and 20th centuries, most of the mentioned works are part of the public domain and thus can be read through websites like Project Gutenberg.


*Thanks to NetGalley and Chronicle Books for providing an e-ARC of this book in exchange for an honest review. 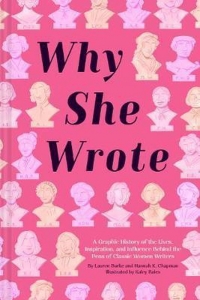