1.Here in the Dutchspeaking regions (The Netherlands and Flanders) you are still fairly unknown. Can you introduce yourself to everyone and tell us a little about yourself?

Thank you so much for inviting me into your literary nook!

I’m an Australian writer of science fiction and horror. I sold my first story in 1993 and have had at least one story in print ever since, writing and publishing even when my children were tiny. In fact it became even more important to me when they were young, because writing meant I could maintain my own self and not just be ‘mother’.

I live in Canberra, but I’ve also lived in Melbourne, Sydney and Fiji. Fiji was wonderful. We were there for a diplomatic posting and I met such interesting people from Fiji and around the world, including one friend I hold very dear who happens to be Dutch! We became friends partly because we shared a similar sense of humour.

I write short stories, novellas and novels, mostly inspired by the way humans treat each other. I’m fascinated by ghosts, by the afterlife, by the things that make our skin crawl. I still love writing, although I don’t find it any easier than I did when I first started out!

I still have a copy of a story I wrote when I was seven, and of the story I consider my first real one, written when I was 14.

2. How did you get through quarantaine/Corona time?

Such difficult times for many. I’m in an incredibly lucky position. My house is comfortable, with a large backyard. My husband has a secure job, and my writing job, of course, can be done from home. Our two grown children were home with us during the worst of it here in Australia, so I felt assured they were safe. The internet certainly helps keep us all connected.

I wrote less during that time, as many have said, although I did manage to hit a couple of deadlines.

3. You write in different genres, what draws you to these specific genres? And do you have a favourite?

The thing I’m drawn to is ideas, and genre is a way of expressing those. If a story suits a science fictional background, then that’s the way I’ll try to tell it. If the horror element is more important, I’ll go that way. I love genre because it frees you up to tell a story in whatever way you want to tell it. Anything is possible! There are no restrictions because of boring old reality. I love that. I love being able to take revenge on an evil character by giving them eternal life, I love coming up with a technology that explores what it would be like to put teenagers to sleep until they reach 18. I don’t really have a favourite, although I’m known more as a horror writer. I love reading all things, in and out of genre, including crime, non-fiction and anything unclassifiable.

4. One of our Hebbanreaders recognised a resemblance with H.P. Lovecraft in your style writing. Is it a right assumption? Are you a fan of Lovecraft?

Very observant! I would not say my work is influenced by Lovecraft, because I didn’t actually read him until a bit later in life. I’m an admirer of the depth of the worlds he created, of the vivid imagination he managed to share with us. My style of writing can be imaginative and dark and explores different worlds, nightmarish ones that almost seem real but aren’t.

5. Where do you get the inspiration for your stories?

The most recent story I finished was inspired by a small news item in an old magazine. It showed a body of water near Alice Springs, which sits at the heart of Australia and is known for how dry it is. Turns out this was a settling pond, for heavy metals to settle at the bottom and the water to clarify.

I’ve long had a fear of deep water, including diving pools! So the idea of what might lie on the bottom of this lake tweaked the story part of my brain.

The story I’m working on at the moment is inspired by a Motor Vehicle Owner booklet I found at a second hand bookshop. It is meticulously filled out, with about 250 entries of cities, petrol used, cost, all that. I’m fascinated by it! I haven’t decided who the traveller will be in my story yet. Good, bad, a ghost...who knows?

So my ideas come from many places. Things that intrigue me, anger me, upset me, or things that just set off a little ‘ping’ in my head!

6. Do you prefer to write short stories over novels?

I like both, and novellas as well. Each one is right for a different method of story telling.

Short stories are great if you have one single idea, one great twist, that kind of thing. You can move forward to the end point without being distracted, and you can get away without explaining everything.

In a novel, you have to have more than a single idea. You need more backstory, more distractions, more sidepaths and back alleys to explore. I don’t think a novel should end with a twist; I think the reader has been too involved to be tricked in this way.

7. Congratulations on your Shirley Jackson Award nomination. You were quite suprised about that. Unfornately you didn’t win. How do you feel now?

I was surprised, and so thrilled. I love the Shirley Jackson Awards. I’ve been a judge twice, and I won it once. So I know how hard it is to make it onto the shortlist! I’m very, very proud of that. While, in all honesty, it is even nicer to win, I’m very happy just to make the short list.

8. Is Shirley Jackson an example for you?

Definitely. I adore her work and have for a long time. I still remember the first time I read The Lottery. I was absolutely stunned. Until then, most stories I read had a happy ending. This one? The ending is so brave. It inspired me early on to be brave in my own fiction.

9. If anyone here on Hebban should start reading your stories, with what story should they start?

This is one of the hardest questions! My most recent book is the novella Into Bones Like Oil, which was shortlisted for the Stoker Award, the Shirley Jackson Award and the Aurealis Award. It is a bit gentler than some of my fiction but still very dark and disturbing.

The Grief Hole is a novel from IFWG Publishing. It’s an exploration of loss and what comes after.

Short story wise, my collection A Primer to Kaaron Warren is probably a good place to start. That one has essays and all sort of things!

10. Is there something you would like to know about the Dutch readers of Hebban?

Lots of things! My Dutch friends here are broad and voracious readers, so I know how much you love to read!

Thanks very much for this interview. We hope to see more of you and hopefully you will come to Holland someday!

That would be so wonderful! It is very high on my travel wish list. 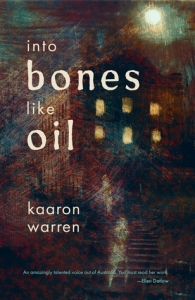 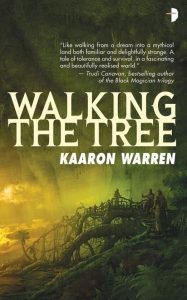 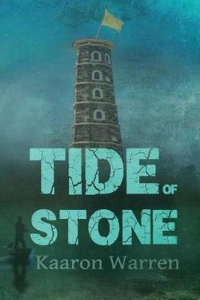 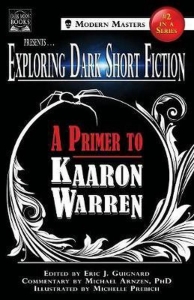 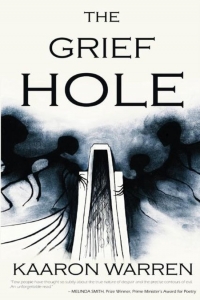 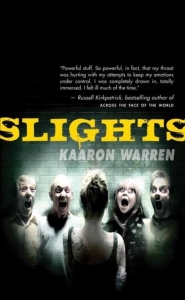