The book starts rather slow and it took me a while before I could get into it, but once into the story it took off as a fast train that didn't stop till the last letter.
While in the 'Miranda's rights' series she's still frantically searching for her missing daughter that contact is restaured in this book. Also the 'it's complicated' relationship with her boss Parker has ended up in a wedding. Despite those changes she did not cool down very much. She manages to keep herself out of bar-brawls and fights but still speaks her mind frankly as ever and even the husband can't keep her from doing that what she thinks is necessary.

The plot in itself lacks a bit of credibility; as if any self-respecting police department (i.e. Las Vegas) will hire an out of town agency to handle and solve a high profile case. Even the press-conference is left to them! Apart from that the story is fast-paced and entertaining with quite a bit of action. Definetly a pleasant read.

1
All Eyes on Me - Linsey Lanier 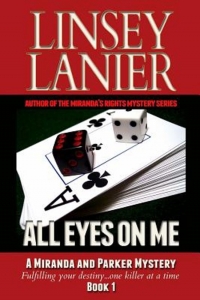