2 complete strangers, in need of a break from their lives (each for their own reasons) trade, their houses for a month. After being publicly humiliated by her ex-fiancé, photographer Prue leaves her Norfolk cottage for London. Semi-known actress Madi recovers from cancer in the rural village of Shelling.
What neither woman knows is that Madi has a stalker who comes in her room at night and moves things around, what makes Madi question her own mind. This stalker bears a grudge against her and doesn’t like it that the young woman has taken her place. He/she doesn’t appear to be very violent at first but is clearly unstable and might evolve in that direction.
Although they’ve never met, 40 years age-gap, totally different backgrounds, and lives the women get to know more about the other by living in their house and meeting their friends and families. They start liking the other woman better as they get immersed in their lives; especially when they also get involved with the neighbours and communities. Both women seem to have a great time.
But in the background, there’s always that unnamed stalker lurking. Little by little you also learn more about that person, but it might still be a bit of a surprise when you find out the identity.

This is marketed as a psychological thriller, but that would be the ‘light’ version in my opinion. The stalker sees to the suspense element and intervenes regularly with his/her thoughts between the alternating chapters of Prue and Madi. It’s a very cosy and warm story. Even in the big, anonymous London, the writer finds warmth and people connecting with each other for the greater good. There’s also romance involved. But I wouldn’t call it a cosy mystery as there’s no investigating involved nor is it romantic suspense as most of that action is far off-screen. A bit of all 3, I guess. It was a bit out of my usual genre but I did enjoy it.
It was an endearing book with very likeable characters, even the ‘bad’ ones were more tragic than evil. The story focuses on the importance of family and friends in our lives. How differences and arguments can be overcome and that we all need others in our lives. Prue’s mother can be a bit interfering and the small village may feel claustrophobic at times but when she’s all on her own in London where she knows no-one and days go by without talking to anyone, she soon starts feeling lonely. While Madi has the reverse experience in the welcoming community. And of course, I love Flo the elderly cat.
Some elements of this book are pure nostalgia for me. Do you remember button boxes? I remember playing with all those beautiful buttons from old garments that got collected over the generations. My mother had one as well, but my gran's was so much prettier. Who was told as well to wear decent underwear at all times in case you would be in an accident?
I was surprised to learn that England still has Saturday postal delivery. Good for you! I can’t even remember when they stopped doing that in Belgium. And now there’s even talk of delivering the mail only 3 days a week and concentrating more and more on parcels.
I thank NetGalley and One More Chapter for the free ARC they provided for me; this is my honest and unbiased review of it.

1
Be Careful What You Wish For - Vivien Brown 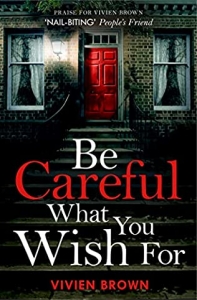