This book is centred around behavioural psychologist Stephen and two women whose lives revolve around him. First, there is daughter Maya; her mother died in a tragic accident when she was 6 and she’s been alone with her dad ever since. He suffers from occasional dark moods and Maya is convinced there’s a secret surrounding her mother’s accident. A secret they have to keep at all cost. She’s dedicated to her dad to the extent that she didn’t go to university when she had the opportunity. The other important woman is Teresa, Stephen’s colleague and long-term friend. She’s married to Garry, a controlling buffoon and on top of that, her mother is suffering from the onset of dementia. She’s had a crush on Stephen since she was a student and is still obsessed with him and constantly thinks “Stephen would understand; he would calm me down; I wish Stephen was here …” Then, something unthinkable happens. Stephen falls in love with a younger woman; a woman that looks a lot like his dead wife.

Although Stephen is the central character, the book is solely told from the POV of the 2 women who love him. I have to say that none of them is likeable at first sight. I warmed up to Maya, the daughter as her love for her dad is genuine and unconditional.
The story starts out rather slow but that gives an excellent opportunity to meet the main characters and form an idea about them and their psychological make-up. You’re slowly drawn into the story, and when you think you figured it all out (I had 2 or 3 possible scenarios as possibilities at first), you’ll learn something new or something unexpected happens, and you have to rethink everything. There is a major twist near the end that puts everything that we assumed to know in question again.
I’m slowly getting fed up with books where the main character is struggling with a parent with dementia. It’s an ugly and cruel disease and deserves a place, but it seems to be a prevalent theme these days; last year I had the same thing with missing family members that popped up in almost every book. That’s just a personal musing; it doesn’t interfere with the quality of the book. If this is Wendy’s debut; well done and I’ll look out for more stories.
The title feels a bit as misdirection. The subject pops up near the end but is in my eyes a minor issue in the whole of the narrative.
I thank Netgalley and Bookouture for the free ARC they provided and this is my honest review of it. 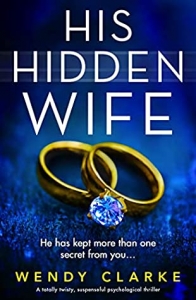