“The only thing necessary for the triumph of evil is for good men to do nothing.”
But who are the good men and how far must they go in their actions?

There are 2 storylines in this book. The first one starts in South Africa, where on the most luxurious train in the world the bodyguard of a Dutch tourist disappears. Later, his mangled corpse is found. When ‘the docket’ is given to Benna Griessel and Vaughn Cupido, the case is already cold and most tourists that were on the train have already left the country. On top of that, the first investigation was done very shoddy and amateurish. As they proceed with their own investigation, they raise more questions than answers. A high-placed officer in the VIP protection unit lies to them that the victim called an ex-colleague and told him that he was committing suicide; a flat-out lie, as he was found with part of a knife lodged in his head. From up in Pretoria, they’re ordered to drop the case.
The second story is set in Bordeaux (France) where Daniel Darrel (formerly Thobela Mpayipheli, a government killer) tries to live a calm and peaceful life as a carpenter until one of his former comrades visits him with the message that the president is compromised and causes too much damage. D.D. is chosen to take him down.
And of course, if you’re familiar with the templates of this kind of stories, both lines of enquiry will connect eventually. And they do this in a brilliant manner.

I’m a bit ashamed to say that the only time that I read by Deon Meyer was ages ago and –for no deliberate reason- I didn’t revisit this author. I know of him of course and expected a lot from this book. The book fulfilled all its promises and expectations in a grand way and I’m sure that this time it won’t take as long before I read another book by this author.
So, I’m not familiar with the history and backstories of the main characters and that’s a bit of a shame. I could follow all threads in this book, but I felt that I missed out on certain things.
The author is proud of his country and his nationality but not blind to the things that go wrong.
I love how Cupido described Dutch as “Afrikaans for drunken people.” I think I can repay this compliment and would love to have a go at trying to read the original version of this book and see how much I can understand. It always intrigued me how much our languages have diversified and evolved from a communal stem.
The author also states very clearly the difference between Holland and The Netherlands. Even though I’m not Dutch but Flemish Belgian (we share the same language), I understand their frustration with having to explain this every time.
Apart from being a brilliant detective, Griessel is also a recovering alcoholic, as is his girlfriend Alexa. Now he wants to propose to her but he doesn’t know how to. In fact, he fears that she’ll say “no” despite knowing how much they both love each other. Griessel plays guitar in a cover band but his real talent lies in his ability to visualise a crime scene and tell frame by frame what happened there.
His partner Cupido can be a bit of a pain with a peculiar sense of humour. But he’s an extremely good investigator and with his friendly attitude gets people to talk to and confide in him.
This is a chilling read about the frightening levels of corruption and greed from the street-level up to the highest echelons of government. An evil that permeated society so much, that it leaves the common man with nothing to hope for or believe in. And even though Deon Meyer loves his country to death, he’s not blind for this awful reality. Of course, in this work of fiction, he doesn’t outright accuse the actual people in those positions, but the truth is never far away. The state capture case has been all over the local media but the major American and European press showed little to no interest in the matter.
For further knowledge about this practice:
-https://en.wikipedia.org/wiki/State_capture
Or S.A. in particular
-https://www.bbc.com/news/world-africa-48980964
I thank Netgalley and Grove Atlantic for the free ARC they provided, this is my honest and unbiased review of it.

Reacties op: murder on the most luxurious train 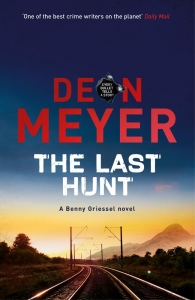