When you pick up a book like this and you know that there are already 6 others before it, you’re aware that the characters carry a lot of history with them already. As always, it’s better to read the previous books first, but in case you haven’t: when referencing to events that happened in earlier books, there’s always enough explication and remembrance to continue without major problems.

Joona Linna prison sentence was reduced to community service as a neighbourhood officer in a small Swedish town. In a few weeks, his dues are paid and he will return to his duties as superintendent for the National Crime Unit. For now, he’s happy with his lover, Valeria De Castro who owns a plant nursery. Will his happiness last this time?
The Oslo police (Norway) find a dead man in an apartment, everything points to a drunken fight until they look in the freezer. It’s stocked with various body-parts in different states of decay. One of the skulls belongs to Summa, Joona’s wife that died from cancer a few years ago. The first name that comes to thought is Jurek Walter (the cruellest monster and worse serial killer ever to roam the Scandinavian countries) and arch-enemy of Joona, but there’s enough evidence that he’s dead; so everybody thought.
Then the German Police contact Joona’s boss and specifically ask for his assistance in a case that involves the murder of a serial rapist. The victim called Joona 2 days earlier and on his back are the same scars he saw on Jurek’s twin’s back.
Then a similar incident also happens in Sweden and in Poland, Belarus and Italy occur similar murders on criminals as well. But Jurek never cared for morality; something else must be the matter. Joona thinks that he’s not cleaning society of the unwanted but that he’s holding a competition who’s to be his next sidekick, and that he’s eliminating the losers.
Joona immediately warns his daughter, who’s studying in Paris to put their emergency plan into action and to go, into hiding. Via various detours, he travels to a pre-arranged meeting place. He warns Valeria as well, but she says that she can’t leave her business and refuses to have police protection...
The authorities aren’t convinced of Jurek’s involvement or even that there’s a serial killer operating all over Europe. Since no-one asked for their help (they’re all too happy to get rid of their worst criminals) Nathan Pollock and Saga Bauer can only investigate the Swedish murder. Saga doesn’t believe it’s Jurek but is certain that they’re after another serial killer.

This is simply, unequivocally a brilliant, great book. It’s one of the best books I’ve read so far this year. The story draws you in right from the start. Even when you haven’t read any previous book, you’re immediately drawn into the action and into the mysterious connection between various events. This is a thriller like they should be. The suspense really grabs you by the throat. And when you know how Jurek operates and what his usual MO is, you expect something nasty to happen on every page. Even when you read a nice, pleasant family scene, you’re afraid that something or someone will come to spoil these moments. And then, of course, something does happen. Be prepared that not everyone will survive this ordeal.
I must say that Jurek is the perfect villain and easy to hate. Yet they gave him a psychological profile that’s still plausible. I sincerely hope that we never will have to deal with someone like him in real life. There have been already too many wacko’s about and that’s exactly why he’s believable. Every nasty crime that’s listed in the book has occurred somewhere already. For a serial killer “that’s not really interested in killing,” he leaves a memorable body-count in his wake.
Joona is a troubled man, but that’s hardly a surprise after all those trauma’s he’s undergone. As the main character, he’s sympathetic and likeable. He’s not an easy person and has a strong will and his own specific view on justice and morality. He suffers from migraine attacks, something I can relate to. His love for his daughter is overwhelming and the thought that he may lose her as well cripples him. He goes into hiding with her, but she’s a young woman that starts to doubt if that’s the right reaction to the threat.
Saga is the real protagonist in this story as she carries out the investigation together with Nathan. The longer Saga works on this case, the more she starts behaving like Joona; paranoia and all. When Jurek captures her dad, she’s being blackmailed by him. He plays a cat and mouse game and messes with her head. She’s a very likeable character and easy to relate to. I love how she cares for her sister on top of being a dedicated police officer. You can’t really blame her for not believing Joona when he says that Jurek was back as she’s the one that shot him 3x and found part of his body later.
All those different story-lines that occur more or less at the same time, force you to keep your attention very focused if you want to keep track of where everybody is and what they’re doing.
I also had a look at the Dutch (my mother tongue) translation of this book, albeit just a preview. But from that small part, I carry the impression that the English version reads easier. So, part of the praise goes to the translator as I didn’t find the name in the ARC.
I thank Penguin Random House and Netgalley for the free ARC they provided, this is my honest, unbiased review of it.

Reacties op: One of the best books this year 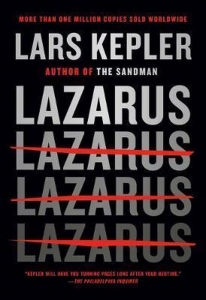