The book starts with a very thoughtful dedication: to all the key workers that kept Britain going through the pandemic. I add my regards to this to all of them anywhere in the world.
This book is set in the most beautiful part of England that I visited. Unfortunately, we’re not given beautiful scenery but vile, horrible examples of the worst human behaviour; a shrill contrast.

PC Morgan Brookes works her first day as an independent patrol woman when she called to the scene of an apparent suicide. When nor the children, nor the husband can be contacted, she senses that something is off with this case. DS Ben Matthews sends her back to the house to look for more clues. Behind a door that looks as if it leads to the garage, she finds a cellar with the lifeless bodies of the husband and the 2 daughters of the dead woman. It’s a horrid, gruesome view; their heads are all smashed in and blood is everywhere. The oldest daughter has very weak signs of life but remains in a coma and chances for survival are very slim.
As the team is missing half of its detectives, they’re seriously understaffed and Ben is told to pull someone from the general response as a temporary relief. He picks out rookie Brookes, which doesn’t fall well with other hopeful officers.
The detectives discover that 45 years ago, in the seventies, there was a very similar murder case in the same house. There’s also a politician that had an affair with the murdered mother, a nosy newspaperman, a few red herrings along the way before they find out the truth.

I have several, issues with this book. The main one being that there’s absolutely no respect for procedures, hierarchy, and even common sense of the police. There’s no way that a rookie will ever be promoted like that on her first day. This is not the only place where this happens. Procedures are repeatedly ignored. Ben doesn’t obey anything he’s ordered to do and disrespects his boss in a way that no-one will accept. On top of that, it’s made out as if Morgan is some kind of genius while the experienced officers need 3 visits to the house to discover the murder weapon. When they have it, nothing is done with it.
Around the halfway mark, I figured out what must have happened. It wasn’t too hard to figure out. When the detectives have all the information the reader has, surely they must suspect something along that line.
Then there’s the developing relationship between Ben and Morgan. You see it coming from the first day they meet. Getting together would be nefarious for their careers, but I predict that by book 2 or 3, they’ll be an item.
All those elements speak of a romantic cosy mystery, not of a gripping crime thriller. If you’re looking for a simple, pleasant beach read that doesn’t have to be realistic but can put a smile on your face, this is a good choice.
I thank Netgalley and Bookouture for the free ARC they provided for me, this is my honest, unbiased review of it.

Reacties op: More a beach-read than a thriller 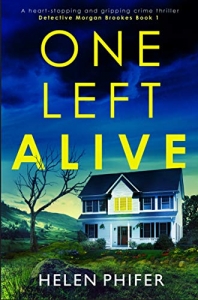