When she was 16, Nikki Hunter snuck out of the house to go to a party. When she returned, she found her parents murdered. The murderer was a boy just a few years older who’s been in jail since. Nikki left Stillwater and is now a famous special agent with the FBI forever on the trail of an elusive serial killer, Frost.
When 2 16-year-old girls who disappeared a few months earlier, are found frozen in a cornfield in rural Minnesota the first thought is that they’re victims of Frost. Nikki is not too happy to return to her home town where she’s forever ‘the girl whose parents got murdered’ especially now that there’s the commotion about the conviction of Mark Todd because of previously untested evidence. During the investigation into the new murders, people just won’t leave her alone about her parents’ case. It doesn’t take long for her to see that these murders are not the work of Frost, but she insists to continue her work.
Unlike in most stories, at first, there’s no real conflict between the FBI and the local sheriff. That changes later on. Sometimes it’s a bit confusing for non-Americans to keep up with the differences between the various law enforcing agencies and their specific job descriptions. Luckily, here we don’t have to deal with all the acronyms.

What I want to say is that I admire the work of organisations as ‘the innocence project’. Unfortunately, there are a number of people that get convicted for crimes they didn’t commit. There are various reasons why these things happen: shoddy police work due to underfunding and understaffing, lazy lawyers that don’t care for non-paying clients, prejudices … And once convicted, no-one will believe they’re innocent anymore. Now, with all the new scientific techniques, we like to think that such miscarriages of justice are a thing of the past. But people forget that those tests are expensive and not everything is widely available. Don’t forget that some of those innocents are serving a very long prison sentence or even on death row, which is my main argument against the death penalty.
I greatly enjoyed this book. It had everything a good crime mystery needs. A likeable detective who’s a strong female protagonist that appeals to female readers, enough background to picture her but not too much to interfere with the narrative, a sprinkle of romance, a good and solid story, a few red herrings and some unsavoury characters to hate. I can’t find any big wrongs in writing or story. This is a good and decent book.
I thank Netgalley and Bookouture for the free ARC they provided and this is my honest, unbiased review of it.

1
The Girls In The Snow - Stacy Green 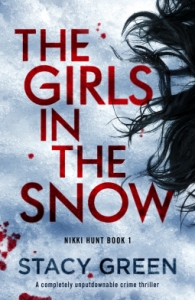