2008, a new, well-meaning but ambitious psychiatrist comes to work in an underfunded mental hospital. One specific patient catches his attention. It’s a young man, Joe, who was committed to the hospital when he was only 6 years old. Everybody who tried to treat him or even came in contact with him has either committed suicide or became mad themselves. The ambitious doctor swears that he will cure the incurable patient. It doesn’t take long before this patient convinces the doctor that there’s nothing wrong with him, that he is completely sane and that it’s all a massive scam and an elaborate conspiracy. He even states that the head-nurse that committed suicide a week earlier was in fact murdered because she planned to expose the scam. Then, the doctor decides that he will break out this patient. But things don’t go as planned and the tale becomes darker and darker.
This is an ingenious well-crafted story that starts out slow. The first pages felt like something a bit old fashioned that was written in the fifties or sixties and gave the impression that it was going to be a medical mystery. It’s presented as the blog of an unnamed psychiatrist on a (no longer existing) online platform and each entry reveals more of the case and leaves the reader guessing for a diagnosis. But hardly noticeable, darker and supernatural things creep into the story until you’re suddenly reading a horror novel. This is done so slowly and masterful that it’s the logical and inevitable conclusion of the story. I saw the ending coming, but only very late.
It’s a very short novel (128 pages) and there are only a few characters that are more or less caricatures of archetypes; the loving motherly one, the old wise one, … But it works really well in this setting. It was a bit like a short Stephen King book, but I certainly don’t imply that it’s a copy. As this appears to be the first book by this author, I’m curious for other work by him.
Luckily, this book isn’t intended to be realistic. As for the mechanics of a mental hospital and the relations between co-workers and patients, they’re not always plausible. But what the heck; it was creepy and a good read.
I thank Netgalley and Houghton Miflin Harcourt for their free ARC; this is my honest and unbiased review of it. 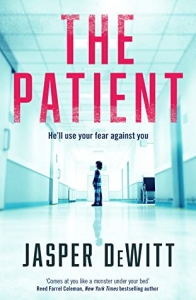