After the discovery of a massive amount of kiddie porn on the hard drive of paedophile Alan Thurgood, Emma Hunter (true-crime writer) and police officer Jack Serrovitz are trying to identify some of the children on those gruesome videos. One of the children they can name is Jemima Hooper, an 11-year-old who disappeared 6 years ago and was found murdered 18 months later. Around the same time, in Poole (Dorset) a young woman, Aurélie Lebrun, daughter of an important French politician, turns up after being held captive for 13 years since she was 10. The father asks Emma to get involved in finding the culprit. At first, she’s a bit hesitant, but there’s the off-chance that Aurélie might have met Anna or Jemima during her incarceration; an opportunity she can’t resist. But there’s something off with this story. Can the father be involved, is he blackmailed, or is he using all this for political gain? Not everything is what it seems.

I think that I must start counting. Once again, one of the main characters has a mother with Alzheimer; I just don’t know what to think about this new trend. It’s good to raise awareness about this cruel and ugly disease. But it’s a bit too much when it occurs in every book. It still has the other trope that was so popular last year; the missing family member.
The story is up-to-date as it refers to the difficult Brexit negotiations, but there’s no mention of the Covid pandemic. That’s something I miss in the contemporary novels; everybody skirts around that topic. I’m certain that it has an impact on the manner of policing and working but nobody seems to want to tackle this problem in their books.
The real topic of this book is of course child abuse and the long term emotional and physical scars it leaves on the victims. I don’t know if any amount of therapy can undo the effects of the bestial behaviour that those children are subjected to. For the men who’re guilty of such heinous crimes, I can have no sympathy or excuses whatsoever. The death penalty would be far too easy and benevolent. Slow and excruciating torture would be more in place; I suggest starting out by stripping them naked and tar them with honey before releasing a few colonies of bullet ants.
The story of Aurélie is tragic but unfortunately not unrealistic. Every once in a while, you hear the story about a lucky escapee but how many unfortunate victims are never found and die alone in a filthy cellar or hole. Even Stockholm syndrome happens in some of those cases. You also have to keep in mind that for the larger part, the captive remains the mental age they were when taken.
There’s also a lighter side to the story. The sizzling attraction between Emma and Jack is sabotaged by frequent misunderstandings and lack of proper communication. In fact, they’re both merely afraid to be rejected. Well, with 3 more books to come, they’ll come to their senses eventually.
I received a free ARC from One More Chapter and Netgalley; this is my honest, unbiased review of it. 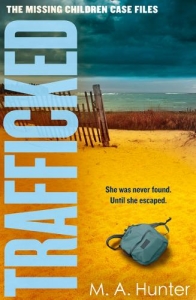