When MIT8 is called in for the homicide of a film director, they find a really gruesome scene. The victim is beaten and kicked to death. On his neck, there’s a strange triangular symbol drawn. Although his wallet and watch are missing, his phone is still present. The DCI Marcus Porter thinks it’s a robbery gone sour but DI Dan Lockhart thinks differently. If you want to mug someone, you don’t hide in the woods of Wimbledon common at midnight to wait for potential victims. With this amount of violence, it’s bound to be something personal. When more murders follow in the course of the week Dan goes against his orders and he asks psychologist dr Lexi Green to help them with a profile. This is not the first nor the last time that Lockhart ignores the commands of his superior
At the same time, Dan’s assistant Maxie Smith works on another case that involves a serial rapist. Halfway, both cases seem to overlap and the investigations are brought together.
We also get regular updates from the murderer’s POV without giving away his/her identity. The murderer had a life-long wish to know what it feels like to kill someone. Now that the first victim has fallen, 4 more people deserve to die according to the killer. The 5th one will be the detective that investigates the case: Dan Lockhart.

Apart from the suspense of the story, there is also much attention to the private lives of the detectives and doctor. All of them have serious issues with things from their past.
Lockhart suffers PTSD from his deployment in Afghanistan that makes him dissociate at times. On top of that, his wife just disappeared into thin air when he was over there and now her family want to have her declared deceased; something that will entitle them to half of Nick’s house. He’s drowning his sorrows several nights in a week.
Maxie also suffers flashbacks from an accident that happened during a previous case when the suspect fell to death.
Even Dr Green has still serious problems after that same case and tends to drink more than is healthy.
DC Khan is pressured by his parents to wed a second cousin from Karachi, but he’s not interested in an arranged marriage. He’s been on a few dates with an atheist girl that he met online but doesn’t dare to tell his family.
Zac Boateng, the protagonist of another series by Chris Merritt also makes an appearance in this book. I like that when different series are set in the same universe. This story is also the second one in this series but can be read as a stand-alone. The references to what happened prior to this book are a prima incentive to read that one as well, but it doesn’t interfere with the story.
It’s an interesting mix of both the private lives and how they impact an investigation or one’s outlook on things.
This is one of the better police procedurals I’ve read recently. It draws your attention in right from the start. The main characters are seriously flawed, which makes them all the more human and sympathetic. I have my reservations about the detective with his missing wife as I’ve encountered that trope far too often over the last few months. But as the book ends with a serious cliff hanger on that topic, I can’t be anything but curious to where that last discovery will lead.
I thank Bookouture for the free ARC they provided through Netgalley; this is my honest, unbiased review of it.

2
Who's Next - Chris Merritt 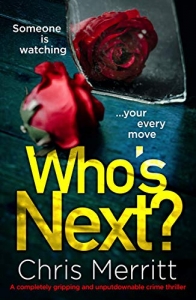