'On a Sunbeam' first saw the light as a webcomic (from fall 2016 through spring 2017). Later on it was also published as a graphic novel.
So if you'd like to discover this story you can choose between the paper version or the webcomic version that is still available for free at https://www.onasunbeam.com/.

If you're looking for a plausible science-fiction story, then this book won't do for you.
It takes place in space, but no one is wearing a helmet or space suit.
The spaceships take the form of giant goldfish.
Some planets just consist of a school, a gigantic building, …

If on the other hand you want to immerse yourself in an inspiring story of growing up, friendship, love, adventure, … then you're at the right place.
Supported by beautiful drawings, you'll probably read this story in one go.
Because you really want to know how the main characters fare.

All the characters are women.
That's right, there's no place for men in this story.
In the beginning this may seem a bit odd, but as soon as you're totally immersed in the story you (almost) won't even notice it anymore.

The story centers around Mia.
In the first storyline we follow her when she attends a new boarding school where she meets Grace.
The second storyline intervenes regularly and shows us Mia's present state where she's working in a team that restores dilapidated buildings. Because of her search for Grace, we regularly switch between the two storylines.
These different storylines are backed up by a different color palette.

One of the few flaws of this graphic novel is the fact that the characters sometimes are drawn very similar and thus become difficult to distinguish from each other.
That's the main reason why this book gets 4,5*. But as the overall impression is really good, this rating is rounded up to 5*.

She was only 17 when she got an email from Avery Hill Publishing asking her to do a book. Although initially she refused, a year later she agreed and created her debut graphic novel The End of Summer.

Originally from Austin (TX), Tillie Walden now teaches at the Center for Cartoon Studies in Vermont, where she also graduated in 2017.

If you want to find out more, you can head over to her website https://www.tilliewalden.com/.

If you want to know more about Tillie Walden and her graphic novels, you may also want to take a look at following interesting interviews:
- Multiversity Comics
- The Comic Journal
- Pipedream Comics
- NPR
- Comics Verse
…

2
On a sunbeam - Tillie Walden 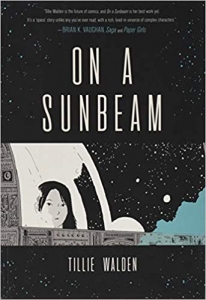