Is pink - sorry hót pink dragon Ether real?
Or is he just a figment of Ian's imagination?

In the end it all comes down to the same thing
Just read and enjoy Clarke's humorous creation!


We meet Ian Laughlin MacDonald when he celebrates his 30th birthday in the little town of Teisburg.
Working as a reporter for the newspaper The Express, he often thinks about his successful former job as a writer of game storylines. In the past he had a work-for-hire contract clause, but now he tries to write a new game storyline that he could sell or license to a studio for royalties.

But the screen remained resolutely blank, and the little blinky-flashy line on the page went blithely on wit hits business, blinking and flashing and mocking him. He felt like swearing at it and wondered if that was why it was called a cursor.

But inspiration lacks …
Till one day he wakes up at midnight and notices there's a dragon in his bedroom.

“Riiight,” the dragon said. “Let’s start with the basics.” It cleared its throat.
“Me dragon, you not.”
Still sleepy, Ian nodded. “Okay.”
“I have a problem. You’re going to help me.”
More alert, Ian said, “Why would I do that?”
“More basics: me big, you little.”
“Is that a threat?”
“No. It’s a subtly worded construction designed to elicit optimum cooperation with only a minimum of coercive pressure.”

Dragon Ether is one of a kind.
Not only does he really stand out with his hot pink colour, but he has a fantastic sense of humour as well.

"I promise I won’t bite.
I generally swallow people whole.”

In the course of the story he goes on an adventure with Ian.
On a real fantastical quest actually.
Well, sort of.

““No, no.” Ether shook his big head. “When someone is trudging through the woods, wet, cold, wounded, etcetera and in need of shelter. Something always comes up, but not until that someone starts to despair. Are you despairing yet?””

As you'll discover along the story, Ether is really a champion in delivering puns.

“This flower. It’s … smiling at me.”
Ether throtted back to see. “Oh, of course. Those are twolips.”

Those puns are so much fun!
There are really many of them and it's such a joy to recognize the books, movies, characters, … they're refering to.
Author Chandra Clarke proves to have a very broad general knowledge, because a lot of the jokes refer to international themes (like Danish hygge, Greek Socrates, several Asian mythologies, England's Shakespeare and James Bond, …).
There are so much inspiring jokes and laughable situations in this story, that it's possible to talk about them for hours.
But instead of discussing them further, it's just better to discover them for yourself. That way you'll enjoy this humorous journey even more ;-)

Ian glanced back at the dragon. “What’s our greatest invention? You mean like the wheel or something?”
“No. The novel.”

Although the innumerable puns and other jokes could totally hijack this novel, that's not the case.
In fact, they're woven beautifully together and there's actually a good story underneath it all that takes the whole to a higher level.

Let’s imagine that Terry Pratchett, Douglas Adams and the Monty Python guys would have met in a pub, and after a considerable amount of beers, decided to write a modern version of ‘Alice in Wonderland’. The result could have been ‘Pundragon’.

This is a quote from another reviewer.
It perfectly captures the overall impression this story leaves on its readers.

ChandraKClarke.com is my space for writing humourous short pieces about science, life, technology, and parenting, and occasionally, more serious posts about things like business and the environment.
My partner, Terence Johnson (the best British import since the Aston Martin), and I founded Scribendi.com, an award-winning editing and proofreading company, which was acquired in 2017. We currently own Inklyo.com, an online writing courses company, and a fun little boardgames cafe.
Together we’re raising four children and a couple of dogs. We think they're pretty awesome, but we might be biased.

This description can be found on Chandra Clarke's author page on Goodreads.
Are you curious to know more about her other work, her sources of inspiration, …?
Feel free to head over to my interview with her.


*Thanks to NetGalley and Tiger Maple Publishing for providing a digital copy of this book in exchange for an honest review. 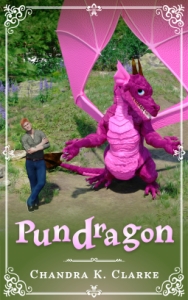