If you like the description "post-apocalyptic western comic book"
You'll love this one and absolutely have to go and take a look!


Post-apocalyptic western comic book
Actually there is no better way to describe this story that tells us more about an unstoppable virus that attacks iron and thus destroys a big part of civilization. Not only buildings, metal weapons, … disappear. Humans are also affected by mutations, due to the iron in their blood.
In this strange new world a lonesome cowboy - known as 'The Transporter' - seems to have only one mission in life: transport anything anywhere for anyone, no questions asked. The only favour he wants in return is for his clients to swallow a special egg. But what are his intentions? Is he a hero or a devil?

Part one
This book is the first part in a French series created by scenarist Tristan Roulot and cartoonist Dimitri Armand.
Story: Although the beginning of this series is told in only 56 pages, there are a lot of different storylines that are all well worked-out. The only downpoint is the fact that the transition between the different lines is not always clear: sometimes you are in a flashback and suddenly again in a present storyline. But apart from that mystery, black humour, interesting life questions, … are all covered in this 'part one' that makes you long for part two, which hopefully won't take too long to be created and published.
Pictures: Sometimes a bit dark, but overall an intriguing and nice visual depictment of the story. If you want to have a brief idea of what to expect, you can watch the trailer.

Interview
If you master the French language, it is recommended to watch the interview with Tristan Roulot.
Not only does he tell about his reconversion from law student to comic book scenarist and his way of working (he always first comes up with the beginning and the end of a story), but also about the influence of the corona-lockdown on his way of working (with 2 children in the house there's a lot of his work that is done at night) and about his view on the series (that will eventually be a trilogy).

*Thanks to NetGalley and the publisher for providing an e-ARC in exchange for an honest review. 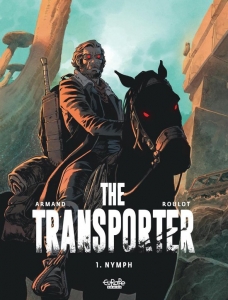