This story takes place around 1891 in London.
Dr James Carlyle is a hospital surgeon who specialises in mortuary science. Together with police inspector John Jennings he also investigates the new French theory about the uniqueness of fingerprints. His daughter Adelaide is his assistant. She’s a very high spirited young lady with feminist ideals and political ambitions. In the previous book, they met with Matthew West a street preacher from the Wesleyan church. He has fallen in love with Adelaide and has the approval of her dad but the young lady is dead set on proving that women can be totally self-sufficient and happy without male interference.
When a corpse in dr Carlyle’s mortuary turns out to not only as being poisoned but also as being that of a man who was hanged a year earlier, the doctor calls on the help of his friend Matthew. Some sort of subterfuge must have taken place during the hanging but how exactly it was done and who was behind it are unclear. Just as important is the matter of who felt it necessary to poison the resurrected criminal.

This book brings some very strong arguments against the death penalty. In the past spoke out several times against this practice. Most important is that we can’t always be absolutely certain that a person is indeed guilty of the crime he’s accused of. There are many men in prison, on death row and executed who are later proved to be innocent. And yes, I also have the same sentiment as most people that some perpetrators are that evil, vicious and inhuman that they deserve to suffer and have no right to live. But if we act on that sentiment, we are no better than a murderer. I can’t morally justify executions, even if they’re done painlessly and clinically. For those who are religious, there is written: “Thou shalt not kill!” In Victorian London, the hangings were a public spectacle that attracted many spectators. We’re confronted with the brutality and unpleasantness of them on the very first pages of the book.
It’s not only the hangings that are mentioned and described. Adelaide’s political ambitions make it possible to point out many of the ailments of Victorian society and especially the living conditions of the poor. But her main interest lays in the inequality and oppression of women. She’s extremely outspoken on that topic. She’s not prepared to allow Matthew any closer to her than friendship and swears never to marry. But when Mary, the woman of the anti-capital punishment group turns up and doesn’t hide her interest in him, Adelaide reacts very frostily. So, unwittingly, she may harbour softer feelings for him. She reminds me of the character ‘Annie Fuller’ in the Victorian San Francisco mysteries from Louisa Locke. If you like those, I’m certain you will like this series as well.
Adelaide and her friends are far more liberated than the average lady at the time. They’re professional women, own businesses and property and are very outspoken. They do not want to comply with the expectations that society has of women. It’s the brave choices that these women made, that form the base for our own liberties, possibilities and all we take for granted. This was just 130 years ago. Could you live under the restrictions these women suffered? I think I prefer social distancing and lockdown!
I haven’t read the first book, but that was no problem to get on with this story. There’s a short explanation in the first chapter who everybody is and how they’re related. They’re all very likeable, apart from the villains of course. I knew who was responsible quite early on in the book but I thought that it couldn’t be this simple because I didn’t see a motive. It was a bit of a shame that I guessed it too early, but I enjoyed the rest of the story as well. There are more than enough other elements in this story; romance, history, political and social comments, religion. I don’t know if it can be called a cosy mystery as the description of the hanging is unpleasant and some of the action occurs in the mortuary. The rest is written more light-footed and positive in tone. It’s a short and pleasant read with decent historical research. At the end of the book, the author gives a few interesting historical facts about the issues he mentions in her story.
I really want to give 4,5 stars because it was too easy to find the culprit. Guess that I feel generous today.
I thank Sapere Books and Netgalley for the free ARC they provided; this is my unbiased and honest review of it. 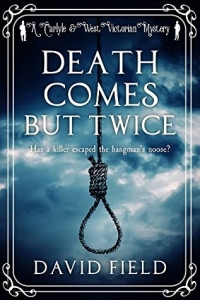