This Book is dedicated to all the key workers who kept the world ticking during the lockdown 2020. A very nice thought, I say.
After Investigative journalist, Emma Hunter takes down a pedophile ring that operated from an orphanage she’s approached by Templeton, lord Fitzhume. His granddaughter was abducted a year ago. Despite paying 2 million £, the little girl was not returned. The police think she died in an explosion and they don’t search for her anymore. Emma is his last hope. Initially, she wants to refuse but her own sister also disappeared 20 years ago and reluctantly she accepts to find out the truth about the kidnapping. Everybody in the family has secrets that they don’t want exposing and could it have been an inside job? All the players in this drama point the fingers at each other.

The impact of the loss of their (grand) daughter has left very deep wounds that haven’t healed in the key players. They’re all struggling with their loss and grief, unable to move on. The characters and effects are painted with a lot of empathy and understanding. The author has created such a realistic set of actors that you can picture them in front of you.
There’s a conversation between Emma and Freddy, early on in the book that brought up such strong emotions that I was almost in tears. There are some beautiful people in this book.
Emma, the protagonist is a very likeable and sympathetic character. She’s struggling with her newfound fame and doesn’t like it much that she’s suddenly recognised by other people. She’s very down to earth and much prefers to stay in boring old, sandy Weymouth than the hustle and bustle of the bright lights of London.
The trope of the main character who’s her/himself the relative of someone who’s disappeared is becoming a bit overused in my opinion. Over the last 3 months, I’ve read at least 5 books with this theme. Although, in this series, it is an essential aspect of the back story. The whole series is already planned and they show the covers at the end of this book. I think that in every book we’ll get 1 or 2 clues as to what has really happened to Emma’s sister and in the last one we’ll find out the whole story.
This writer has his heart and mind in the right place. You can notice this when he mentions the lack of respect for health care workers who deserve fame and fortune far more than journalists, models or reality stars. He’s also very serene when he paints the relation between Emma and her mother who suffers from dementia.
I don’t know the identity of the author, apart from ‘Stephen’, but the alias he uses relates 100% with the main character’s name. Good pun!
I do not like the cover of this book, though. I think it looks cheap and a bit tacky. That’s a real shame because a lot of people do judge a book by its cover. I urge everyone not to do this here. But who am I, maybe you might like it. It’s well worth reading though, this is a beautifully told story about loss, grief, despair and hope. And don’t forget that it is also a suspenseful crime mystery and police procedural; as the journalist is assisted by Jack Serrovitz, a former police detective that works cold cases now as mere PC to spend enough time with his daughter. He’s also a great guy and I feel some romance in the making.
The constant change between now and then can be misleading if you don’t pay attention. I was caught out for more than a page before I looked at the header. They’re also not in chronological order, so keep your attention at all times.
Be warned that the story still dishes out an unexpected uppercut, just when you think that all is resolved. I eagerly await the next volume in this series.
I thank One More Chapter and Netgalley for the free ARC they provided me with and this is my honest unbiased opinion of it. 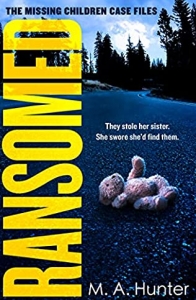