3 years ago, a horrid and freakish thread of events nearly derailed 2nd year resident Benjamin Oris’ life. He’s moved on since then and works hard to gain the respect of his superiors. He’s extremely happy to be chosen for the team of reconstructive surgeon dr Lock.
On a winter walk with his dog and baby-mama, they find the severed leg of a patient that Ben operated on 2 weeks earlier. The unfortunate man died 2 days ago from pulmonary emboli: The police and hospital both think it’s a distasteful prank by students.
When the upper thigh with the hip replacement still present of another one of his patients turns up in another park, the police start questioning him. This patient was alive and well when she disappeared. The most gruesome bit here is that there are human bite marks on the leg. And this is not the last severed limb of a patient that is found. So when Sophia (the mother of his son) is scheduled for a knee replacement, Ben fears that she might be the next victim.
Most of the surgery team have recently survived a plane crash in Alaska, where they fought 5 days against starvation and the freezing cold. In short intermissions we witness the struggle of someone fighting against the beast that got hold of him/her and is now inside and it hungers for bone-marrow and flesh.

This was a very intriguing, interesting, and thrilling book; interesting because it tackles and describes various mental illnesses and theories. As well it gives a wide range of information about orthopaedic surgery and various aspects of it. It’s not a scientific work of course, but I always like it when a writer knows what she’s talking about and this certainly seems to be the case here. Maybe the cases discussed in this book are very uncommon and not too realistic, the scenario is still plausible.
The story was full of suspense with several twists and subplots: an intern with a drug problem, a surgeon stealing the concept for silver implants by this resident, cannibalism, a possible wendigo turned loose, the romantic and personal interests of Ben, and a touch of the supernatural … There’s no dull moment in this book.
I was and still am curious about those tragic events that took place in the first book. There are several references to those but they’re not explained as to what exactly has happened. It piqued my interest enough to try reading it anyway.
Something that has nothing to do with this book as such, but when I googled some of the parks mentioned in the book, it dawned on me that the word ‘park’ carries a very different meaning over here than it does in the States. Sometimes it’s hard for someone from Belgium to visualise the scale of American cities and parks and how close to each other both are. We have built up nearly the whole of our countryside and driving from 1 city to the next town shows little to no countryside as such. Even the British label our Belgian city parks as simple ‘greens’; let alone the size of the Philadelphia parks that are still present in a city with a population 3 times that of Antwerp. If there’s anything about the USA that I envy it’s their vast nature parks.
This book is many things, a medical thriller, a murder mystery with some sprinkles of the supernatural, and romance thrown in. Carrie Rubin used a very good mix of ingredients that cooked up a very tasty dinner. And I wait with pleasure for the next volume, as Ben’s story clearly, isn’t finished.
I thank Netgalley and Indigo Dot Press for the free ARC they provided for me, this is my honest and unbiased review of it.

Reacties op: A Wendigo In Philadephia 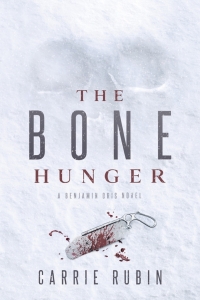