20 years ago Will was a successful infamous forger of antique manuscripts and documents. After losing part of his hand in an attack in Ireland and being found out as a forger, he moved back to the States with his family and walked the line since then. Now someone from his past has resurfaced and blackmails him with a secret that could land him life in prison. They want him to copy a rare and previously unseen first edition of Edgar Allan Poe’s earliest poem, so they can switch them and sell the real booklet in an auction without the actual owner being any the wiser that he’s left with a duplicate. Meg, his wife who doesn’t know about this secret, strongly disagrees with this plot, but his eldest daughter, a skilled artist and printer becomes more and more involved in the illegal work.
Of course, blackmail is never that simple and usually, it doesn’t end once you give in to the blackmailer. And the story doesn’t end here, this is only the start of the family’s problems. There are secrets, theft, and murder in both their future and past.
Will the criminal plan succeed? Will Will’s old secret be found out by his wife, or by the police? Will Meg tell what she witnessed? Lots of questions, that need to be answered in the rest of the book.

This is a pleasant and entertaining story full of suspense with an original plot, but it’s not the discovery of the century. Certainly the first half of the book lacks incoherence. It’s a very chaotic rendering of the family’s history up to the point where the blackmail starts. The whole book is told in the alternating voices of Meg and Will, so sometimes you see the same occurrence told from both their points of view. But their retelling of the past isn’t chronological and I had problems to assess what exactly had happened in their earlier lives and when exactly it did, and what the relationship between the various characters actually was. It takes up a very large part of the book to tell all those previous events. Maybe it would have worked better if they had a short linear coverage of the past and then another part labelled ’20 years later’. As it is now, we don’t know how exactly the forgers fell out or how they were found out. Did he confess and tell about every fraud? Obviously not, as he still comes across them. How come that his only punishment was to refund the money he wrongfully received?
The second part of the book is a lot faster paced and there’s a lot going on as well. It feels almost as if it’s a different book.
The author uses several difficult -and to me hitherto unknown- words and expressions. Not that many, that it interferes with the comfort of reading, most of the time the meaning is clear from the context. But I don’t think that some of them are used very regularly in everyday speech.
At least I learned quite a few interesting things about the world of rare book collectors, calligraphy, and about forgery that goes with it.
I didn’t know at the time but apparently there’s a book called ‘the forgers’ by the same author that tells the story of Will’s forging years.
I thank Grove Atlantic and NetGalley for giving me a free ARC of this book; this is my honest and unbiased review of it.

Reacties op: Not as good as I hoped 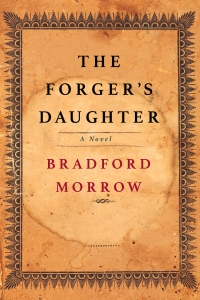