Another book with a beautiful dedication: “To all who have suffered loss or illness during this year of pandemic.”

The book starts out with 2 very disturbing scenes of the past.
- 24 years ago a coffin-maker watches how his friend locks his wife up in the shed and beats her regularly.
- 12 years ago a young girl who’s new in town is buried alive in a coffin by her new ’friends’.
Now; When 2 16-year-old girls are on their way to a Halloween party and take a shortcut through the woods, they stumble across a bell without a clapper that’s tied to the buried coffin. At first, they think it’s a practical joke but they call the police anyway. A dead man lays inside; there are claw marks on the inside of the lid so it looks as if the victim was buried alive. DI Harte recognises him; it’s a man she told of for being rude to the café owner 2 days earlier. The killer seems to have a connection with her and writes her letters with intimate details about her own abusive past.
Then, there’s Cherie, married to Christian and mother of 2. We don’t know what she’s up to but she’s keeping secrets from her husband. It’s a secret from her past that she shares with some school friends.
Who are those people, what are they hiding, what is all this about? Why do they involve Gina Harte in their game? You know there must be a connection or it wouldn’t be in the book.

While you try to puzzle out who’s who and what is going on, the suspense increases with every chapter (there are a lot of them in this book). It’s frustrating, so many secrets, clues and puzzle pieces and I couldn’t make sense of them. Grrr, I loved it though. It’s definitely one of those books that keep you up half of the night. And when I finally went to bed, I kept milling it over and over before falling asleep.
My first assumption was that there was someone taking revenge on men that behave badly against women. But if so, what is the connection with Gina’s abusive ex? He’s dead, so it can’t be him, and why would he target abusive men.
Although the victims aren’t very likeable, you can’t go around murdering ‘bad’ people. We all know a couple of people without whom the world would be a better place. But if we all go rogue serving vigilante justice, the world would be pure anarchy and chaos. Unfortunately, we’re stuck with laws and systems that aren’t always bringing justice and righteousness where they should. So I would urge our lawmakers (wherever in this world) to update both the police and justice departments into the 21st century.
When the identity of the killer was finally revealed, I was surprised. Despite my multiple theoretical scenario’s, I never saw this coming. The ‘why’ was already clear by then but not the ‘who’.
Most of the story is written from DI Harte’s POV but there are also chapters about Cherie and her friends, and those by the killer who doesn’t reveal his/her identity. It’s very well constructed and it keeps your attention to the last. It’s both police procedural and psychological thriller.
Despite being the 7th book in this series, it’s very easy to read on its own. Of course, there are some references made to the past but I’m not even sure if those are just background information or that they’ve been part of former stories.
I thank Netgalley and Bookouture for the free ARC they provided me with; this is my honest and unbiased review of it. 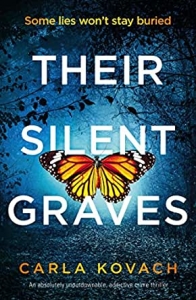