When a young blonde woman, clad in nothing but a sort of kaftan, is found murdered and posed along the back of the ‘White Horse’ (a massive chalk horse that’s carved out on a hillside in Thames Valley, dating back to the iron age), police and the local people are quick to point the finger at a local neo-pagan cult ‘the children of the white horse’. But the cult is adamant that they don’t know the victim and also locally no-one has seen her before.
As coincidence happens, Jess Bridges has just gone undercover in this cult as sister Poppy in order to talk sense into the daughter of a writer friend of Michael, her ex. But she can’t find the girl and it looks as if she left them around the time of the murder. So the paths of Jess and DI Leo George are to cross again.

Jess has a few issues; she has ADHD and very bad impulse control. She may be a scatterbrain, but she’s also one of those people that you can’t help but like them. She’s sympathetic, loyal, spontaneous, and doesn’t have a bad bone in her body. Once again this combination of qualities puts her in danger and in this story she discovers that she’s more a Johnny English than a James Bond. And she decides that she needs to find an online you-tube course on lock-picking.
This story is rooted in reality, as many places and the geoglyph self, do exist in the real world. The psychological information that Michael finds on cults and cult leaders is also well researched.
This was again a fun read without any pretensions. It’s the second book in the series, but you can read the story on its own without a problem. It’s quickly becoming one of my favourite series. There are a couple of good one-liners and quotes that will raise a smile.
The mysteries themselves aren’t too difficult to solve, I guessed most of the answers. A cult, a forbidden Ice-house, massive electric bills in an off-grid community are some of the clues for one of them. Nonetheless, I enjoyed the story.
I thank NetGalley and One More Chapter for the free ARC they provided and this is my honest, unbiased review of it. 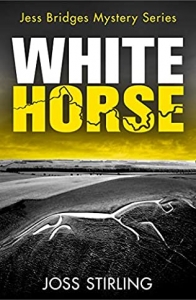