Fran, who’s in her late 30s, works in a bookshop and is a loner with no close friends. Since her school days, she’s been obsessed with Charles Fry. She’s certain that they have a connection and that one day he will realise this. She doesn’t only follow him on social media but also stalks him by following him around, sitting on a bench on the estate where he lives, hanging out near him. For now, he’s very married to Fiona with whom he has baby twins. He’s only friendly and cordial towards her, just like he was at school when he saved her a few times from awkward situations.
She also has a younger sister who’s the mother of Rose, a niece she never met, something she feels very bad about. Ellie ran away from her after a vicious argument and lives abroad now but most of the time Fran doesn’t know exactly where. They only talk on Facebook and through e-mail. She misses her terribly and often thinks to spot her somewhere in London.
One night when she’s following Charles to the platform of the tube, she witnesses how Dickie (another schoolmate) falls under the train. She thinks that he recognised someone and may have been pushed but doesn’t tell anyone that she was there as well.

There’s something universal about unrequited love and as a young teen, who hasn’t pined after some unattainable boy we were secretly in love with? I do remember riding my bicycle numerous times a day through the street where this boy lived. (I can’t believe it, but I’m not sure anymore what his name was). But for most of us, we grow out of these infatuations. Here, our main character hasn’t and is delusional about the meaning of Charles’ friendliness.
This was a difficult book for me. It started out very slow and I didn’t think this book was for me. All these people who’re stuck in their schooldays friendships and never move on, just gossiping and keeping secrets from one another as if their still 16. The characters are really annoying; Caroline the widow was the most likeable of the lot. With Fran, I felt sorry for her but also wanted to give her a good shake-up and shout “Grow up, get a life and get real!” This part was tedious and I only kept reading to find out if she saw something or not. With all her fantasies about Charles, she’s not exactly a trustworthy narrator. So you’re left guessing. But it is really drawn out and I wouldn’t give it more than 2 stars.
But then a bit over halfway, the story changed and became interesting. At this point, I got pulled into the narrative and the suspense. I won’t tell you what happens, but it’s something I never would have guessed. A very well found intrigue, I must say. So if you can read through the first half without giving up, you get a second half that’s a really good and suspenseful psychological thriller with several twists and turns that deserves at least 4 stars.
I don’t know how 2 parts of the same book can be so widely different but it’s very difficult to rate. I settled for 3 stars as the average.
I thank Netgalley and Avon for the free ARC they provided me with; this is my honest unbiased review of it.

1
You And Me - Nicola Rayner 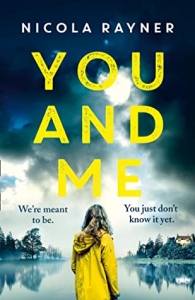