The Handmaid's Tale tells the story of Offred – not her real name, but the patronymic she has been given by the new regime in an oppressive parallel America of the future – and her role as a Handmaid. The Handmaids are forced to provide children by proxy for infertile women of a higher social status, the wives of Commanders. They undergo regular medical tests, and in many ways become invisible, the sum total of their biological parts.

Offred remembers her life before the inception of Gilead, when she had a husband, a daughter and a life. She had been a witness to the dissolution of the old America into the totalitarian theocracy that it now is, and she tries to reconcile the warning signs with reality: "We lived in the gaps between the stories."


Offred's tender remembrances of times past provide relief from the brutality of her new life, in which her body has become a cause of discomfort for her. Her former life is presented through glimpses of her university friends, her husband, her freedom. They are shadowy memories made all the more indistinct by Atwood's lyrical prose, in which facts appear to merge into one another, and history appears immaterial; Offred is kept alive by her inner life, and reality and history become a kind of symbiotic mirage.

Fiercely political and bleak, yet witty and wise, the novel won the inaugural Arthur C Clarke award in 1987, but Atwood has always maintained that the novel is not classifiable science fiction. Nothing practiced in the Republic of Gilead is genuinely futuristic. She is right, and this novel seems ever more vital in the present day, where women in many parts of the world live similar lives, dictated by biological determinism and misogyny.

Reacties op: The Handmaid's Tale is in the honorable tradition of Brave New World and other warnings of dystopia. It's imaginative even audacious, and conveys a chilling sense of fear and menace 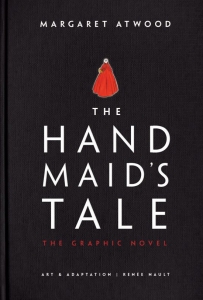