A woman from the Akha tribe of China’s Yunnan province becomes a tea entrepreneur as her daughter grows up in California.

See explores another facet of Chinese culture, one that readers may find obscure but intriguing. Li-Yan, the only daughter of a tea-growing family, is a child of the Akha “ethnic minority,” as groups in China who are not of the Han majority are known. The Akha are governed by their beliefs in spirits, cleansing rituals, taboos, and the dictates of village shamans. As a teenager, circa 1988, Li-Yan witnesses the death of newborn twins, killed by their father as custom requires, because the Akha consider twin-ship a birth defect: such infants are branded “human rejects.” The Akha, inhabiting rugged, inaccessible terrain, have avoided the full brunt of China’s experiments in social engineering, including the Great Leap Forward and its resultant famine, the Cultural Revolution, and the One Child policy. Li-Yan’s family harvests mostly from wild tea trees as opposed to terraced bushes, and their product is discovered by a connoisseur, Huang, who will alter Li-Yan’s destiny. The Akha encourage youthful sexual experimentation, but progeny outside marriage are automatically “rejects.” So when Li-Yan discovers she is pregnant by her absent fiance, San-pa, she hides, with her mother’s help, in the secret grove of ancient tea trees which is her birthright. After the infant is born, Li-Yan journeys on foot to a town where she gives up her child. Over the next 20 years, we follow Li-Yan as she marries and is widowed, escapes her village, becomes a tea seller, and marries a wealthy recycling mogul, Jin. The couple moves to Pasadena. Intermittent dispatches inform readers that, unbeknownst to Li-Yan, her daughter, named Haley by her adoptive parents, is also in Pasadena. Haley’s challenges as a privileged American daughter pale in contrast to Li-Yan’s far more elemental concerns. Although representing exhaustive research on See’s part, and certainly engrossing, the extensive elucidation of international adoption, tea arcana, and Akha lore threatens to overwhelm the human drama. 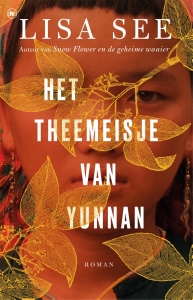