Terrible secrets lead basketball star David Baskin to fake his death while honeymooning in the tropics in this manipulative but otherwise engaging first novel. His bereaved bride, supermodel Laura Ayars, not sure that David's drowning was accidental, starts sleuthing--which proves dangerous when somebody begins killing people who may have the answers she wants. Meanwhile, David, fitted out with a new identity and appearance, tries out for his original team, the Boston Celtics, and ``replaces'' himself at his former position. Why he has faked his death is explained in the story's penultimate surprise. But why he risks playing in front of fans who know his style is never addressed. Crucial coincidences abound, such as the love affair of David's brother and Laura's sister--adults who, as kids 30 years before, just happen to have witnessed their parents' worst sins. Coben manufactures tension primarily by keeping key details out of his narrative, a method that eventually wears thin. The resolution comes as a relief, with less of a bang than its buildup promises

Reacties op: If you like twists and turns in the story, this author is for you. 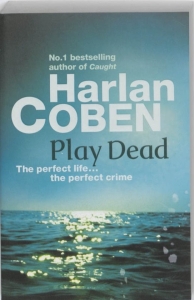