The dissonance of owning your half-sister as your slave and the complexities in general of sibling relationships are explored in this sweeping, ambitious Civil War-era novel. Formerly entitled Slave and Sister in its self-published edition (2014), it has been re-edited and re-released.

Adelaide is the daughter of German immigrant Mordecai Mannheim, a successful Jewish cotton plantation owner in a small northern Georgia town. The privileged Adelaide’s primary role in life is to marry well and within her faith. One of the kitchen slaves, Rachel, is gifted to Adelaide as her personal housemaid. Awareness eventually dawns on the women that they share a father; a fact that has never been acknowledged. When Adelaide refuses to marry a lecherous man from Savannah, one hand-picked by her father, she and her mother are cast out of Savannah society. Ultimately, Adelaide rebounds, marrying the only other Jewish man in town, Henry, who strikes a business deal with Mordecai. Henry and Adelaide have a loveless marriage, and Adelaide fears that her husband will fall in love with her slave, just like her father did years ago.

Not only does the story provide a fascinating historical perspective, but doing so in part from the eyes of Jewish characters adds an intriguing dimension. The transformation and growth of the women, as well as the complicated intricacies of their relationship, forms the backbone of this well-researched novel. Although she is imperfect, having been marred by hefty emotional baggage and her lot in life, the strong-willed Rachel is one of the most human, resourceful and engaging characters in recent literature. In creating these tenacious female characters, the author turns the roles of women on its head. Despite their contentious relationship, replete with blinding jealousy and residual pain, but bound by propriety and love, the two women unite, against all odds, risking their own personal safety, to fight for what is right.

1
Sister of mine - laurie petrou 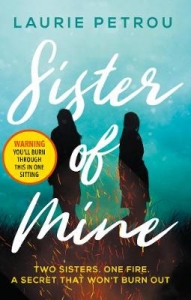