The Sun Is Also a Star is one of those books you want to re-read over and over again. The 2016 YA novel about the fateful encounter between two teens, Natasha and Daniel, the day before Natasha is scheduled to be deported, is equally as beautiful as it is timely considering the current administration's harsh immigration policy
.The romantic coming-of-age story follows two high school seniors -- Jamaican American Natasha and Korean American Daniel -- from the day they meet on a crowded New York City street and shows how they go on to change each other's lives. There is occasional strong language ("s--t," "f--k," "a-hole") and some passionate (in one case horizontal) making out. The book contains many educational and historical lessons about everything from immigration law to time-travel paradoxes to the reasons so many African-American hair-supply stores are owned by Koreans. The story is also one of the few interracial young-adult romances to feature two people of color, showing that love can and does bloom across differences.


Parents need to know that The Sun Is Also a Star by Nicola Yoon (Everything, Everything) won a 2017 Michael J. Printz Honor and was a 2016 National Book Award finalist for Young People's Literature

Reacties op: Her best book yet! I look forward to more from this author 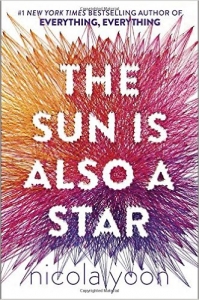