Author Laura Hillenbrand first heard of Louie Zamperini while doing research for her best-selling book Seabiscuit: An American Legend. She was searching for information on the racehorse Seabiscuit and kept encountering stories about Zamperini, who ran in the 1936 Olympics and then was a World War II POW survivor. After finishing Seabiscuit, Hillenbrand contacted Zamperini and asked him about his life. Spellbound, Hillenbrand spent the next seven years reading diaries, letters and unpublished memoirs; she interviewed Zamperini's family, friends, and fellow Olympians, as well as American and Japanese veterans. Unbroken: A World War II Story of Survival, Resilience, and Redemption is Hillenbrand's engrossing narrative of Louie Zamperini's remarkable life.

While growing up in California in the 1920s, Zamperini was a failing student and was constantly in trouble for fighting and stealing. His older brother, who was a star athlete and exemplary student, introduced Zamperini to track, hoping that the sport would help straighten him out. Zamperini idolized his older brother and was transformed from being a juvenile delinquent to a runner in the1936 Summer Olympics. He had hopes of running a four-minute mile in 1940 Olympics, but, due to the escalating war in Europe, the Summer Games were cancelled. In early 1941, Zamperini enlisted in the Army Air Corps; by November 1942, he was trained as a bombardier and was ready to go to war.

Zamperini and his crew were stationed in Oahu, and survived many dangerous missions while dive-bombing in the Pacific. In late May of 1943, while on a search mission, the engines on their plane failed, and the plane crashed into the Pacific Ocean. Zamperini and two other crew members survived the plunge and were stranded on a small raft, managing with only a meager amount of fresh water and food. Hillenbrand's depiction of the men's desperate plight is filled with suspense, as the men drifted on the ocean, battling sharks, a machine-gun attack from a Japanese bomber, and a typhoon, along with starvation and tremendous thirst. After forty seven days, they caught sight of an island. Their relief quickly turned to anguish, as they were spotted by a Japanese military boat and taken captive.

For the next two and a half years Zamperini endured incredible cruelty at the hands of the Japanese, both physically and psychologically. Hillenbrand's vivid descriptions of Zamperini's treatment are difficult to read; the brutality and savagery that took place in the Japanese POW camps are unimaginable. Zamperini's unbreakable spirit helped him to persevere until August 1945, when his POW camp was liberated.

After returning to the United States, Zamperini suffered from agonizing dreams, tormented by his desire for revenge. Hillenbrand writes of the difficulties that Zamperini and many World War II veterans encountered with the then unknown illness, Post Traumatic Stress Disorder. Zamperini turned to alcohol to forget his pain and floundered for a time. With the help of his wife-- and evangelist Billy Graham-- Zamperini turned his life around and became an inspirational speaker.

Unbroken tells a riveting story of a man with tremendous courage and perseverance. Hillenbrand herself mustered a great deal of courage and perseverance in order to write her books. She has suffered from severe chronic fatigue syndrome for the past 24 years and is seldom able to leave her house. This well-written and meticulously researched book tells an incredible story about an amazing World War II hero.

Reacties op: A Riveting Read About a Remarkable Person 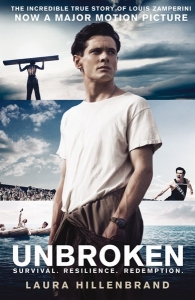