You Were Gone’ is chilling, sinister and all the more terrifying because it’s believable. Raker doubts his sanity, and he’s not alone. Is the woman claiming to be his beloved wife her and how can she be when she died?
Raker still grieves his wife, and it’s this vulnerability that makes this thriller work. Circumstances conspire to make him doubt everything he has built his life on since Derryn’s death.
The story is told from Raker’s point of view with additional scenes from the antagonist’s point of view but is this Raker or someone else? Each chapter builds the suspense and tension, and as the plot starts to reveal the truth, more twists throw up additional questions and possible suspects.
The ending is surprising but ties up most of the loose ends, however, a problem looms on the horizon for Raker as his and other’s past actions return to haunt him, perhaps in the next installment of this thrilling series.
Even though this is the first Raker thriller I’ve read, I warmed to his deep and troubled character and found the story a compelling but easy read.
I really loved You Were Gone (David Raker #9) like so much more than I was originally expecting, but had absolutely no bloody idea it was part of an ongoing series; no matter this can totally be read as a standalone no issues whatsoever.
So this was a mind-Eff of epic proportions and I couldn't put it down such an engrossing read this was.
This had me second-guessing along with Raker everything I thought I knew to be true.
Could it be true? was David losing the threads of his very sanity? Who was this woman who claimed to be his wife? Where had she come from?
This had so many twists and turns throughout I felt lost in a maze with no clear exit.
So cleverly executed and with such finesse, this was a pleasure from start to finish.
Not my usual genre but so glad I stepped out of my comfort zone.
This will have you psychoanalyzing and dissecting every actuality for hidden messages and meanings and when events eventually reached a conclusion I was seriously shocked at the identity of the puppet master himself.
This was a fabulous addictive Crime Mystery that was glued to my hand till the final curtain.
A complete surprise hit for me

1
You were gone - tim weaver 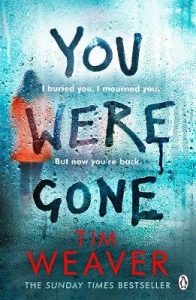