As two of the four kindred have been awakened, Olivia (the earth kindred) and Kyan (the fire kindred) are set out to destroy the world. But they can’t do that without being reunited with the water and air kindred currently residing in Cleiona, the Auranian Golden Princess and Taran, a Kraeshian rebel. And they need help from the sorceress to complete the ritual, Lucia Damora, daughter of the King of Blood. Who has just given birth to a beautiful girl, Lyssa, with the help of a new friend, Jonas Agallon, a former rebel. Will the kindred be able to overthrow the world? Or will Jonas, Lucia, Cleo and Magnus find a way to stop them?
First and foremost, this series has been a ride. I remember starting this series in high school and throwing my book away from me when (*spoiler alert*) Theon died. I was consumed by this series and I encouraged my friends to dive into it as well.
The Falling Kingdoms series is well crafted in the way that it can suck you in and care about its characters. It’s a great series to binge read and is fast paced. The worldbuilding is an incredibly original take on elemental magic and its characters are always entertaining to read. I recommend it to everyone looking to start an new epic fantasy series.

How was the series overall?

The lore is original and well set out throughout the series: the kindred, the watchers, the elemental magic. I think it was one of my favourite things throughout the series to read.
It’s a series that makes you gasp at every turn and was never really predictable. Morgan Rhodes is incredible at writing cliffhangers and you’ll always sit on the edge of your seat.
The plot is always fast paced. I did notice that near the final books the story got to breathe once in a while, it gained its quiet moments and I do consider the series getting better with each book.
However, if you’re fan of well-established romance maybe this isn’t a series for you. There is a lot of romance throughout the series but it never really gets to settle. I usually didn’t notice the chemistry between characters unless I was told or they were already kissing which is often disliked.
In my opinion, not everyone deserved their redemption. I think since Magnus’s character got his redemption arc as well as Lucia’s, Rhodes started to give other characters like Gaius and Amara a shot at redemption which for me wasn’t as enjoyable to read as the chapters where they were purely evil.
And lastly, some things seemed to be put in at the last second: Jonas’ magic, the ‘curse’ on Cleo, Gaius’s backstory, Valia being Valoria. It wasn’t all necessary and just felt like an easy way to lengthen the plot or as a deus ex machina. Especially near the end I felt like entire new information was given to me without anything to follow it up or without any reason.
Nevertheless, I did like the series. It made me gasp, it made me laugh and kept me on the edge of my seat from beginning to end. I recommend this series to anyone who’s looking for a good binge read. Although I wouldn’t recommend the spinoff series Spirits and Thieves, I can’t wait to see what the future brings for Morgan Rhodes.

Reacties op: The end to an epic series! 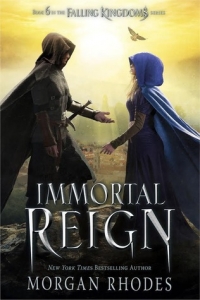