Beautiful But Heartrending, 'The Only Story' Looks Back At Love Gone Wrong.
The Only Story is about looking back on a life and trying to make sense of what happened. It's a heavier, less suspenseful read, with a focus on love rather than death. It's also a far more interior and tormented tale, so excruciating that even its narrator feels the need to step back from it — retreating from the first person I to the second person You and finally even further to the third person He. Barnes explains this narrative self-withdrawal rather bluntly, "nowadays, the raucousness of the first person within him was stilled. It was as if he viewed, and lived, his life in the third person. Which allowed him to assess it more accurately, he believed.
The Only Story is the first of Barnes' books not dedicated to his wife, Pat Kavanaugh, who died in 2008. Significantly, the familiar conundrums Paul contemplates pertain just as readily to bereft mourners as to people singed by romance gone awry. "Is it better to have loved and lost than never to have loved at all?" he wonders. And: "Would you rather love the more, and suffer the more, or love the less, and suffer the less?" This latter query may be, his scorched narrator asserts, "finally, the only real question." But then, Barnes' amatory absolutist equivocates: "If you can control it, then it isn't love. I don't know what you call it instead, but it isn't love." The Only Story is about losing control, but also, losing the ability to lose control.

he Only Story" is, among other things, an examination of how we choose to inhabit the story we choose to tell. It's an examination of how the ways in which the story is told can change the story; even how shifting the lens of the camera from first person to second to third radically changes perception of the same events. And thus, it leads the reader to consider how outcomes can shift depending on how a story is told.
You can read this book as the world's most depressing love story. You can read it as a cautionary tale about emotional and psychological maturity. You can read it as a warning about the ways in which people are inevitably trapped by circumstance. You can just sit and inhale the scent of the scorched earth after the full impact of it hits you.
Or you can take from it the idea that story is what the storyteller makes of it, and remind yourself that "Little Red Riding Hood" may well be the tale of a werewolf-hunter, rather than a story about a basket of treats and a dark wood.
What's your defining story? How do you plan to tell it to yourself? Because really, you're the audience who matters

25
The Only Story - Julian Barnes 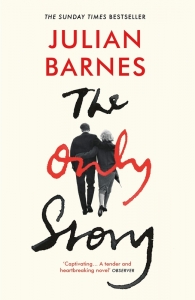