Bernard Cornwell is a productive writer who is most popular for his historical novels; almost every year we can expect a new book. Currently he is busy writing the 'Saxon Stories', formerly known as 'The Last Kingdom'. The BBC made a tv series based on the first two books, as they did with the Sharpe novels.

The 'Saxon Stories' could be his most personal book series. Bernard Cornwell's ancestry leads back to the 9th century, to Bamburgh Castle (Bebbanburg in the series) in Northumerland. He starts inventing the story of his ancester Uhtred.
It is a perilous time to live in. Around this time England does not exist; everywhere are little kingdoms. Their enemies are not only the neighbors, but also the invading Vikings who start to take over the land. In this time Uhtred makes a name for himself.
Starting as a small boy taken captive by the Danes at a raid, from slave boy to warlord, from Christian to pagan belief, he becomes an advisor and friend of the later king of Wessex, Alfred the Great.

Alfred's dream, to unite the small kingdoms, becomes almost true. When we arrive at this book, Sword of Kings, his kingdom is dived between his two sons. Uthred enjoys his days as the last pagan ruler of Bebbanburg. Because of an oath he becomes involved in the succession struggles in the kingdoms Wessex and Mercia.

In a nut shell; this is the story of this book, and it is a bit thin for my liking. Give Uhtred, like Sharpe, a mission and a little group of trusty warriors, and we have Bernard Cornwell at his best. Shield walls, rescuing women and children, marching to the Roman ruins of Lundene, and bringing people together from all over northern Europe, these are the main ingredients of which Bernard Cornwell weaves his stories. The historical part of this book is significantly less than in other books of this series.

Despite the thin story line in this book there is much to love about the characters; Uthred is despite his age still a formidable warlord and an even better friend. At the end of earlier novels in this series I always shared his dream of him getting back to the fireplace at Bebbanburg to live in peace, but it seems that peace is still not to be found which means that Uthred will march again.

Reacties op: No rest for Uthred in book 12 of the Saxon Stories 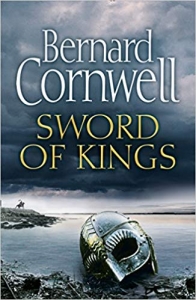