Summary:
In this second book of the selection series, we see how prince Maxon narrows down the amount of participants in the selection until he only has ‘the elite’ left. The six women that are to remain with the royal family are taught many things a queen needs to know and during their stay, the rebels also pay a visit more than once. How will it end for America and Maxon? To what lengths will Aspen go to win America back? And are they safe for the rebellious citizens?

Writing style & form:
I really enjoyed reading this book. Kiera’s style is easy to follow and ensures for a calm and relaxed atmosphere. The novel does not take that long to read, since the style of writing does not really requires the reader to think and the content is not that difficult either.

Plot:
I’m sad to say that I didn’t think the plot was that interesting, especially compared to the first book in the series. You clearly see the different characters develop into the persons they are at the end of the book, but nothing really happens in the plot. Sure, there are some tasks and some attacks, but that’s about it and especially for the attacks, no information is given from another perspective and the scenes don’t really differ from each other.

Another aspect that slightly irritated me is the way in which America and Maxon communicate about their relationship (or whatever you may call it) and the way in which we don’t really see America struggle with her feelings other than the things she tells the reader and the crying sessions. I understand her conflict, but it’s just not vivid enough.

One last detail that I noticed after the last presentations is that Silvia seems to have disappeared and we don’t know what happened after that. Also understandable for the plot, but a bit abrupt.

I just would have liked to see more action, more events and more developments of the characters into clearly distinct persons.

Conclusion:
The Elite was a fun book to read, but not as interesting as I had hoped. The characters aren’t developed that well and the plot was not that interesting. However, it has moved the storyline into a direction where action will need to happen for the story to be logical in any way. Nevertheless, it was a fun read and I don’t regret reading it. 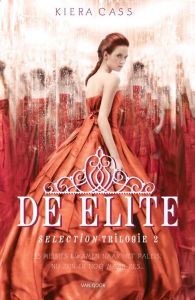