It's not hard to understand why Michelle Obama's Becoming became the fastest-selling book of 2018. One page in, and you find yourself wondering how you could feel such a deep connection to the former first lady without ever being blessed with her presence beyond a TV screen. Or, in this case, a 448-page memoir.Perhaps it's because she details her journey to the White House in such a real, intimate way—teaching us many lessons that we will carry with us into 2019, like the uselessness of asking someone what they want to be when they grow up (epiphany: we play many roles throughout our lives, which makes it impossible to choose just one thing), and the importance of consistently reminding ourselves that our voices matter.

It's lessons like these, and so many individual, personal reasons, why people loved Becoming. Below, exactly what makes the memoir so special.Becoming reads like you’re sitting down with a close mentor for a cup of coffee. A lawyer, businesswoman, educator, wife and mother, the former first lady walks the reader through her life in an intimate portrait of an unsuspecting woman thrown into the political spotlight by her husband’s career. But don’t be confused about the subject: this book is about Michelle with a little bit of Barack sprinkled in. Michelle Obama has clearly found her voice and the power in her own story separate from Barack’s.
From the beginning of the book, Obama paints a portrait of beautiful, simple family life on the south side of Chicago. She traces her history carefully, pointing out tiny, but important, moments in her education like being pulled out of a miserable second-grade classroom. You can clearly see her personality start to develop in her early years and the impact that it has on her throughout the rest of the book. She explains her mentality well, especially the experience of being a young black woman in a sea of white faces at Princeton or in her job as a lawyer. Obama also talks about the losses that have shaped her, including her father and her college roommate. Her statement’s on grief are powerful. “It hurts to live after someone has died,” she writes. “It just does. It can hurt to walk down a hallway or open a fridge.” But most importantly, Obama allows her losses to shape her perspective on life. “Life is short and not to be wasted.”
Michelle does a good job of introducing Barack into the story as a side character instead of allowing his presence to take over the book. From the moment they meet, Michelle makes their differences clear while also giving insight into how they’ve made it work. She also does a wonderful job of laying out the realities of a work-life balance and the compromises that she had to make in order to start a family. It’s refreshing to have a woman be so open about the reality that sometimes the mythical work-life balance isn’t doable. Obama gives great relationship advice, writing about their sacred date nights and the importance of communication with your partner. As a young woman, I found this insight into building a lasting relationship really helpful.
Obama makes her priorities clear from the beginning and is always reluctant to allow her husband to enter the political realm. Starting in her youth with her friendship to Jesse Jackson’s daughter and moving into adulthood with Barack’s state senate loss, she clearly dislikes politics. She describes Barack’s speech at the 2004 National Democratic Convention that shot him to stardom in the Democratic field as a big wake up call. “Must’ve been a good speech,” she writes jokingly. This is a pretty good snapshot of Michelle’s mentality around her husband’s sudden rise in popularity, and she writes a lot about her struggle to maintain her families normal lives in the midst of the new political spotlight. When it finally comes to whether or not he’s going to run for president, the decision comes to her. While reluctant, she decides to let him run simply, “he would make a good president.” Throughout the book, Michelle makes clear compromises to share her husband with the rest of the country, but she seems to see the larger need and impact of what they could accomplish.
One of the most prominent themes of the novel is the power of having female friends and mentors. Throughout the book, she pays tribute to the women who have contributed to where she is today. It’s a beautiful thing to read and made me reflect on the women in my own life who have supported me from day one. Obama also takes on the stereotype of the “angry black woman” (265) and does a wonderful job of diving deep into racial stereotypes and issues of gender in the workplace. But most of all, Becoming is a love letter to her dedication to her daughters. Her passion and love for her girls in the midst of the chaos of the white house is beautiful and inspiring.
Becoming is a triumph of a memoir about what it means to create a path for yourself in life. Obama’s memories are filled with funny interactions with the Queen of England and special moments with Nelson Mandela. She takes us through her various initiatives as first lady and her passion for the family members of those serving in the military. Her words about consoling victims of tragedy brought me to tears and her comments about the opulence of white house life made me laugh out loud. In the last months of Barack’s presidency, Obama walks us through the emotions of saying goodbye and starting anew. Becoming is a memoir that embodies a full life, one that evolves before the reader’s eyes, leaving us all to wonder what Obama will become next.

Reacties op: Everyone has a story to tell and Michelle Obama delivers a great one. 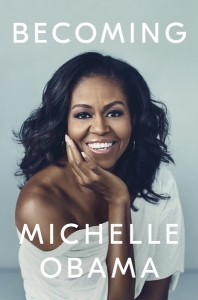