this is a Novella genre.
he story opens with main character Scott Carey paying a visit to a casual acquaintance who also happens to be a retired doctor. The reason for this isn’t merely social; Carey wants to ask Bob Ellis (Doctor Bob as he’s still known) about a recent, strange weight loss he’s been experiencing. He explains to Ellis that he’s suddenly began steadily dropping weight with no apparent cause. After getting Ellis to guess—wrongly—his weight, he hops on Ellis’ scales (a hold-over from his previous life). And proves not only has he dropped to a weight that doesn’t seem consistent with his build and stature, but that he also weighs the same no matter what he’s wearing or has upon his person. After a conversation regarding Carey’s reluctance to go to a practicing doctor (“Because it would be in the system,” Ellis deduces) and promising to keep his friend informed, Carey leaves.
Despite this, the novella still shows flashes of what King is great at; giving the strangest of ideas plausibility, digging into the tics and quirks of what makes us individual and all too human, putting his finger on the pulse of small-town life (though again, this could have been fleshed out so much more). It is, to perhaps make a bad joke, a little lacking in weight, a little too light to really make an indelible mark on the reader. It feels somewhat rushed and would, in this reviewer’s opinion, make a far more interesting novel. Nevertheless, it’s not terrible either. It is an easy read and a quick one, and there’s still much to enjoy. It simply feels a bit uneven. 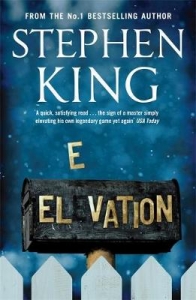