Author follows eight Milwaukee families that lost homes and argues that the lack of affordable housing helps create poverty. No one gets shot, killed or assaulted in Matthew Desmond’s penetrating new book about the effect of evictions on poor urban families in Milwaukee.

Yet “Evicted: Poverty and Profit in the American City” is a profoundly violent book, if one defines violence in a broader sense, as a violence that is embedded in the very structure and modes of behavior that animate relations between tenants and their landlords.six families struggling mightily to pay the rent on their increasingly crappy apartments, and two sets of landlords. The landlords are either a new breed of venture capitalists or merely slumlords, depending on your perspective. Since roughly 2000, rents have shot up while the properties have either stayed the same or declined, so that by 2013 about one out of every three poor families spent seventy percent of their income on housing. Think about that for a minute.

As a result of this, poor families are always one crisis--really one unexpected expense--away from being evicted. The ramifications of being evicted on one's emotional, financial, and physical states are profound. First, once someone gets evicted, finding any kind of housing becomes extremely difficult--one of the ladies called 90 apartments before she found one that would take her and her two kids. You can place blame on these struggling families if you want to, but the fact of the matter is it's extraordinarily difficult for them to succeed, or even to just get by.

I found this book very interesting--to say I enjoyed it would be wrong because much of it is depressing. It made the problems of the urban poor personal. I quite liked some of them and I was rooting for them--"Please, let this landlord call her back!" I felt bad when Vanetta went to prison for armed robbery after her hours were cut, and I cheered when Scott finally got clean. I read it all the way through the endnotes, which are also quite interesting and provide some insights or background info. I really wanted to find out how all the families were doing today (the book takes place in 2008-2009) because I became attached to them and had come to care about them. Unfortunately the author doesn't tell you what became of them, although if I had to guess I'd say their lives continued on in more or less the same vein.

A word on the swearing: this is a well written, professionally done sociological study. The author only uses swears when he's quoting one of the people he interviewed. If you were desperate, poor, depressed and angry, you, too might be given to curse words.

If you enjoy sociological and/or cultural topics, if you care about equality in America, if you are interested in how grinding poverty affects families, pick this up. I learned a lot

Reacties op: Powerful, monstrously effective . . . The power of this book abides in the indelible impression left by its stories

1
Evicted: poverty and profit in the american city - matthew desmond 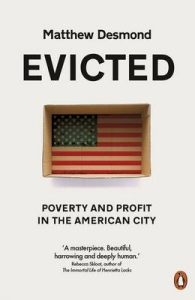